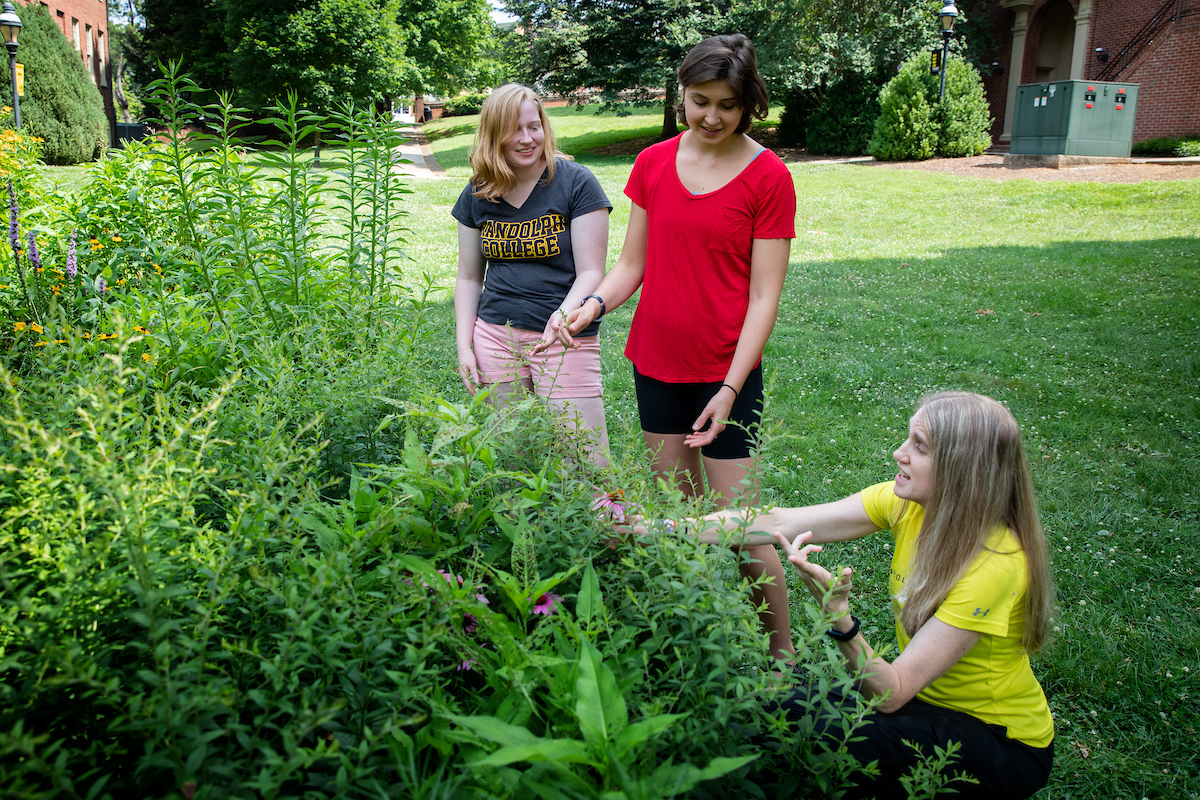 A food forest has seven layers, starting with tall fruit and nut trees that provide a canopy, going all the way down to the roots of the plants that sustain it.

“It’s basically a garden because you plant it, but it’s designed to imitate the ecosystem of a natural forest,” said Eva Pontius ’23. “You’ve got the top canopy with tall nut trees and a lower canopy with fruit trees. Then there are vines, shrubs, and an herbaceous layer to prevent weeds from coming through, and even perennial vegetables, like chives, onions, artichokes, and edible fungi.”

Unlike a community garden, food forests are designed to be low-maintenance, with multiple layers of plants that support each other.

Pontius and Hannah Cloven ’24, along with Randolph professor Karin Warren, have been researching and will eventually design an urban food forest in a vulnerable Lynchburg community for their summer research project. 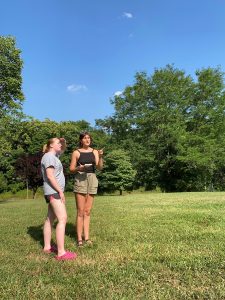 Hannah Cloven ’24 and Eva Pontius ’23 on a site visit as part of their summer research project.

“Our big project is focusing on climate resilience—which parts of the community are relatively strong and which ones are vulnerable to climate risk,” said Warren, Randolph’s Herzog Family Professor of Environmental Studies & Science.

In Lynchburg, the data showed distinct hot zones, where some parts of the city were eight to 10 degrees warmer than others.

The idea of an urban food forest could not only address the heat risk issue—the trees provide shade that can bring down temperatures—but also potentially provide a food source.

“Both Eva and Hannah are passionate about social justice, as are our collaborators,” Warren said. “So they’re looking at intersectional things. Not just where the greatest heat risk is but if there is also a food desert there.”

The work has found them consulting with city leaders and community stakeholders to make sure what they want for their communities is front and center.

Pontius, Cloven, and Warren lined up discussions with those who run food forests in bigger cities and planned to take a virtual tour with student food forest interns at Ursinus College in Pennsylvania.

They’ve also worked to create a brochure explaining the Heat Watch data, something Cloven said they’ll use to connect with the community in an informative, but still accessible, way, while also soliciting ideas.

“It’s a great way to get our heat mapping data out there,” Warren said. “We mapped heat, here’s what we got, and here’s why it matters. That’s a big task, to write something like that, but it’s going to be a really valuable resource.”

Once a location is determined, and agreed on, they hope to begin planting in the fall, with the possibility of some funding from the Virginia Department of Forestry.

It’s a long process; food forests in other cities typically take about two years from the initial idea to full implementation.

“We want to wrap up the project in a way where someone could continue on,” Cloven said. “It’s not going to end with us.”