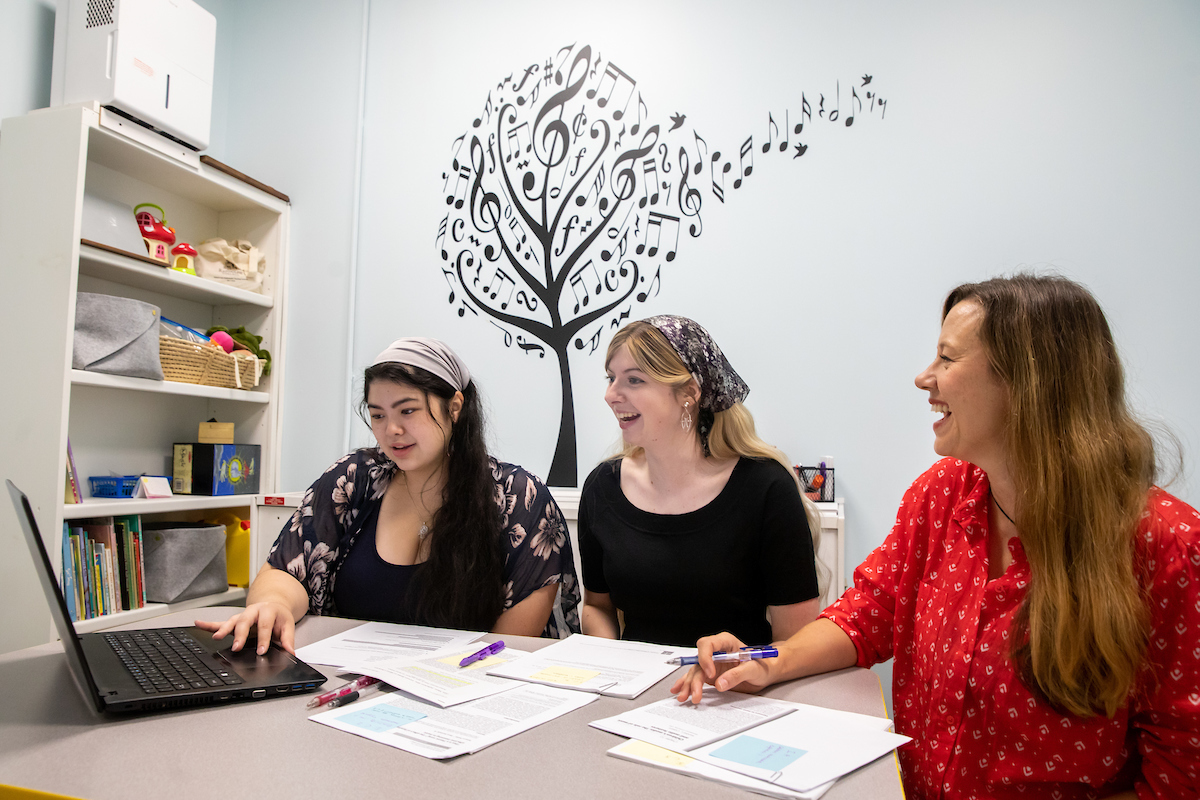 Hanan Davis ’23, Haley Mundy ’23, and professor Sara Beck analyze one of the interviews conducted as part of their Summer Research project.

The popularity of the Frozen movie franchise among children, and the ubiquity of its signature song, Let It Go, presented a unique opportunity for Randolph professor Sara Beck.

“Everyone knows the song, and adults are pretty clear on what it’s about,” said Beck, professor of psychology. “It’s a song of empowerment for this character. She was afraid, now she’s not. The question was if that is equally clear to kids, and how young?”

Beck has delved into that subject for the past two years, working with student volunteers to interview children ages 3 to 10.

“Just preliminarily, we’ve seen that even young kids know what it’s about,” said Beck, who is continuing the work this summer with Hanan Davis ’23 and Haley Mundy ’23 as part of Randolph’s Summer Research Program (SRP).

“Sometimes even when they’re not that articulate about it, they’re still demonstrating a pretty sophisticated set of inferences that have been built. It’s a really active process with them trying to figure out what is happening.”

As of January, 46 children had participated in the study, and Beck came into the summer hoping to add 20 to 30 more.

Conducting developmental research with kids takes time, and it’s labor-intensive to get the kinds of quantities needed to make meaningful comparisons.

“We wanted a big range,” Beck said, “so we can see where there are significant changes in comprehension of the musical emotion the character is feeling and where we start to see more attention to the lyrics, as opposed to the whole multimedia experience the child is having.”

Davis and Mundy spent the early part of SRP conducting those additional interviews. Each session finds them showing participants the Let It Go sequence from the movie, pausing at three key points to ask how they think main character Elsa is feeling in those moments, and how they know she’s feeling that way.

Then they turn to the vocabulary, asking what specific lyrics in the song mean—for instance, when Elsa sings, “No right, no wrong, no rules for me. I’m free.”

“Some answers are very concrete, like she was trapped in her room and now she’s not,” said Davis, a psychology major with minors in art and sociology. “Others are like, ‘Well, she had a lot of pressure from her kingdom and now she’s able to use her powers.’”

Their approach—using semi-structured interviews to talk to kids about a topic they already like and know well—is one that hasn’t really been explored before.

“No one’s really done it, that I know of, at least in the psych space,” Beck said, adding that it took her and another student an entire semester to create a single measure that can capture the understanding of children as young as 3 and as old as 10.

In addition to interviewing more subjects this summer, Davis and Mundy are transcribing interviews done at previous points in the study. Eventually, they will work with Beck to synthesize and analyze the data and make progress toward writing a paper.

“I’d done research in the past, but I liked the idea of getting more experience with qualitative, organic coding,” said Mundy, who is majoring in psychology. “Hanan and I both have an interest in the intersection of arts and psychology, so it’s been really interesting.”

Beck said she’s thrilled to have Davis and Mundy along for the last push of collecting data and then beginning to make sense of it.

“That’s really the fun part, too, going through and looking for patterns in both qualitative and quantitative ways,” she said. “It really is about what the kids are getting from a multimedia musical experience. And sometimes it’s very surprising.”