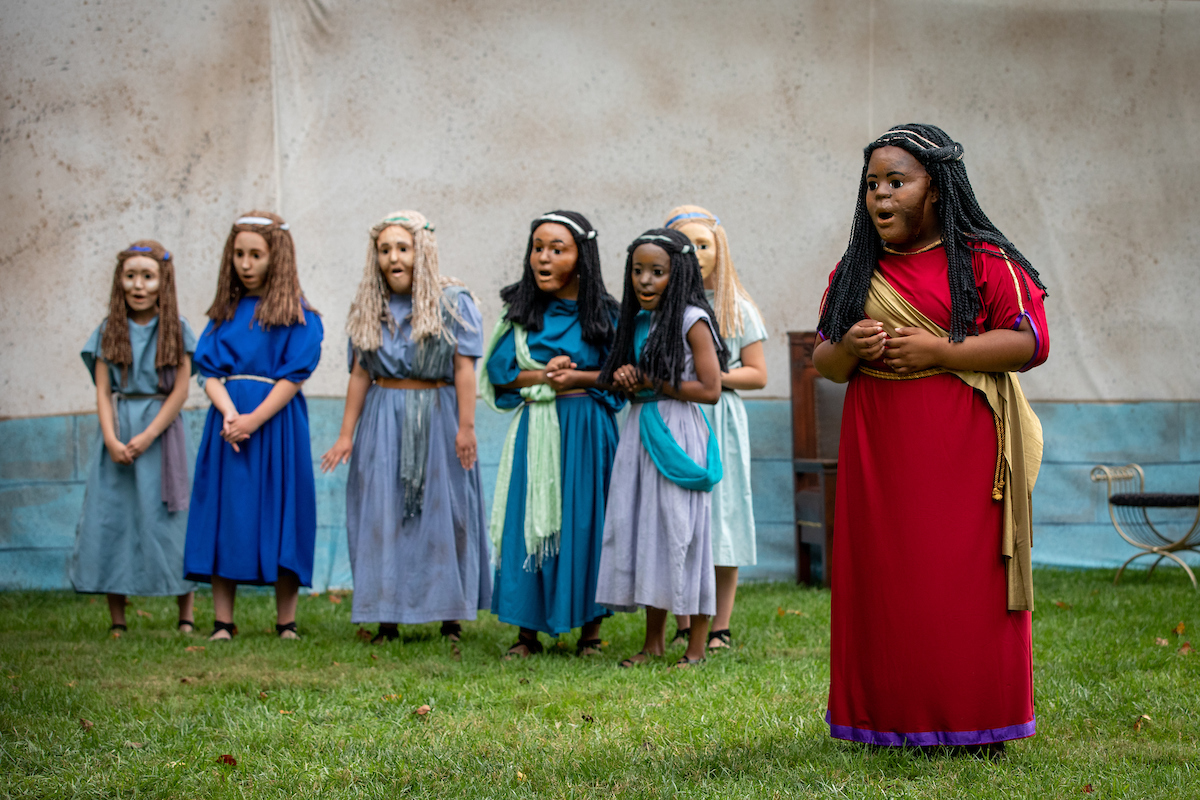 The chorus surrounds Deianeira, one of the title characters in Randolph College’s 2021 Greek Play, lamenting how long her husband, Heracles, has been gone.

“Deianeira’s heart longs for him,” they sang, encircling their mistress, during a performance this fall. “She never lays her worry to bed/Her eyes never dry from tears/She always sleeps with fear of disaster.”

Disaster does, in fact, strike in Heracles & Deianeira, traditionally known as Sophocles’ Women of Trachis, when a misunderstanding between the titular married couple causes Heracles to become very ill.

The play was staged in October in Randolph’s Mabel K. Whiteside Greek Theatre, after a nearly two-year journey that began with a virtual presentation on Zoom last fall.

Between the two productions, actors came and went. Director Amy R. Cohen introduced a new translation of Sophocles’ text, and everyone involved dove deep into a beloved College tradition.

“It’s just the amount of work, on so many levels—the masks; the Dell, which is a beast in itself; a whole new way of acting; and long speeches,” said Evans, who portrayed the same two characters in both the online and live productions. “Whoever does it really loves it. We have this community of people who love the Greek Play and are devoted to making it happen.” 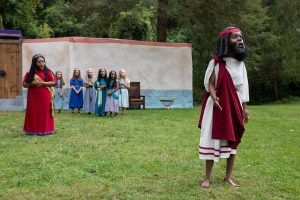 Heracles & Deianeira afforded Cohen, Evans, and the cast a rare opportunity to extend a process that usually lasts about six weeks.

“Every time, we put together something that’s really rich, with all sorts of things for the audience to notice,” Cohen said. “But they don’t get to live with all of these characters, these details, and the richness the way we do. Spending longer than usual on this play made all of that even deeper.”

The live production’s new translation threw a bit of a curveball to returning cast members, but all were in agreement that the change was necessary.

“The other translation worked for when it was, and where we were, being online because of a global pandemic,” Evans said. “The language in the new translation is plainer, which works better in the Dell. It allows us to bring these characters to life in a way that we couldn’t on a screen.”

A tradition continues
The Greek Play tradition dates back to 1909, when Mabel K. Whiteside, a professor of Greek, staged Alcestis at the College. Productions continued annually until her retirement in 1954.

Cohen revived the Greek Play in 2000. During Whiteside’s original run, the plays were presented in Greek, but they have been mostly in English since Cohen took over.

Most importantly, the plays still adhere to conventions that governed ancient theatre.

For instance, three actors play all of the main roles, the chorus remains onstage for most of the play, and the performers wear masks, which are now painstakingly handmade from linen and glue with molds that are created using the College’s 3D printer. 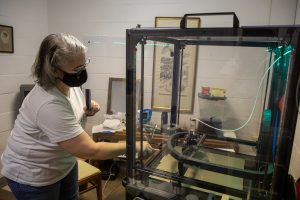 Amy R. Cohen uses the College’s 3-D printer while working on masks for the play.

During the first four productions under Cohen, the masks only covered half of a performer’s face. With no microphones, dialogue would often be lost when an actor turned to address another part of the audience or a character on the other side of the Dell.

So Cohen and three former students, Naomi Fritts ’08, Brittany Stallings ’09, and Katrina Weichmann ’09, spent a few summers researching and developing techniques to build full theatrical masks that allowed performers to be heard clearly from all angles.

Those were introduced in 2006. At that point, the masks were still being made by hand. In 2014, 3D scanning and printing were added to the process.

The first rehearsal with masks always involves some growing pains, but Cohen said she was pleasantly surprised with how quickly this group adapted.

River Gay ’24, who played both Heracles and Deianeira, was a newcomer to the Greek Play and said the process helped stretched acting muscles.

“I know how to use my face, and I don’t have my face anymore,” Gay said. “I had to learn how to make body language a bigger part of my performance.” 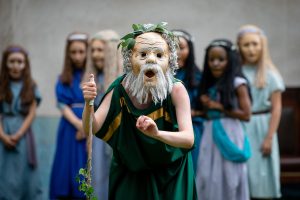 Sabina Sabat ’22 as one of the three characters she played in “Heracles & Deianeira.”

Evans and fellow returning cast member Sabina Sabat ’22 played a total of five characters between them in Heracles & Deianeira, while Gay joined the cast last spring as the title characters.

It’s widely believed that when Sophocles presented the tragedy, the roles of both husband and wife were played by the same performer.

“That is a grand demand of an actor,” Cohen said. “They are both such towering characters in their different ways, and Sophocles gives them so much to do. The speeches are so rich, and I’ve honestly started to think about it as if those two roles together are kind of Sophocles’ Hamlet, as far as how big a task it is and how rich the actor’s part is.”

Deianeira is a much more reserved character, while Heracles, by the time he appears at the end of the play, is in great pain and isn’t shy about expressing it.

“I have a big personality, so you’d think it would be easy,” Gay said. “But it was hard to portray all that emotion and find a balance. It was fun and challenging. I feel like I was pushed out of my comfort zone, which is good.”

Cohen said Gay nailed it from the very first audition, showing “such confidence and intelligence in cold reading the two roles, such clarity in distinguishing between them, and a voice and presence I knew would carry in the Dell, which takes a lot to fill.” 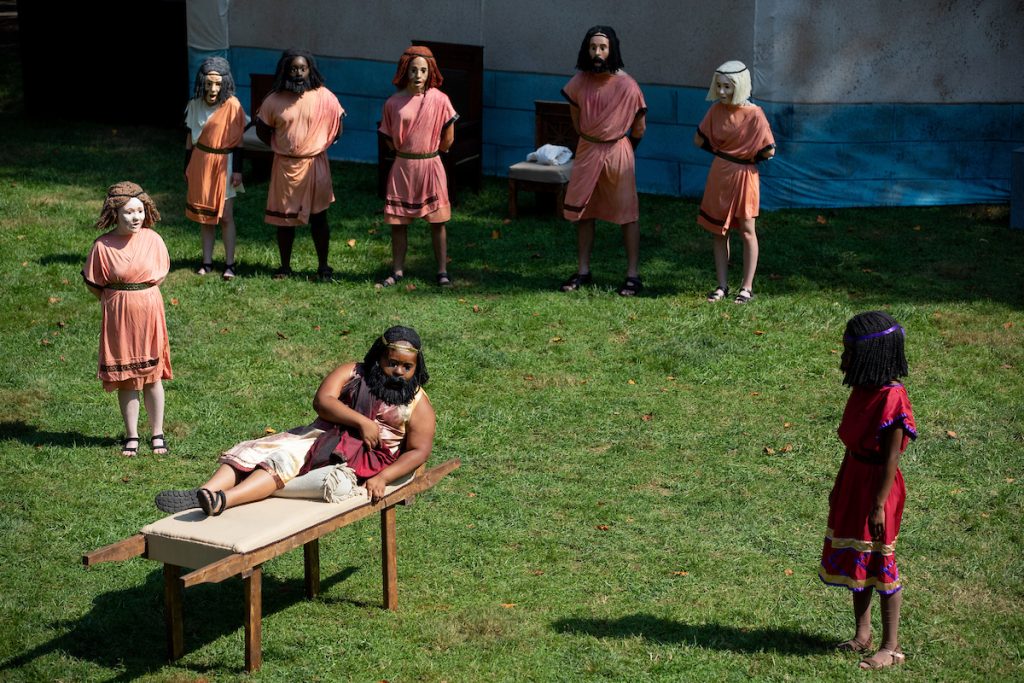 River Gay ’24 as Heracles, who returns at the end of the play.

For her part, Evans portrayed both Hyllus, the son of Heracles and Deianeira, and a herald who plays a key role in the events of the show.

“We’ve been able to create really distinct, unique characters, to the point that I don’t feel like I’m playing both of them,” she said. “I don’t even see myself as that other character when I’m talking about him.”

Cohen also recruited a couple players from the College’s men’s lacrosse team to lend a hand; they were among the soldiers who carried an ailing Heracles into the Dell at the end of the play.

It was one more way to find echoes of a 2,000-year-old tradition in modern times.

“There’s something about it that feels, honestly, very Greek,” she said. “Any big sanctuary you can think of, like Delphi, had the temple to the gods but many also had a theatre and a stadium. The things that went on there would be international panhellenic competitions in arts and sports. So it feels like a really natural partnership.” 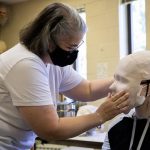 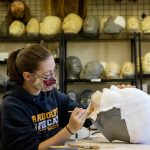 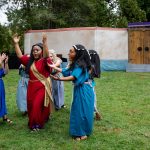 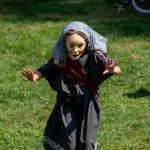 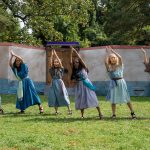 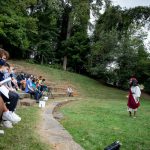 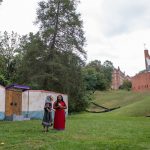 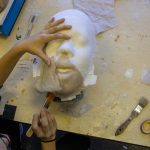 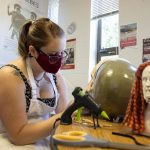