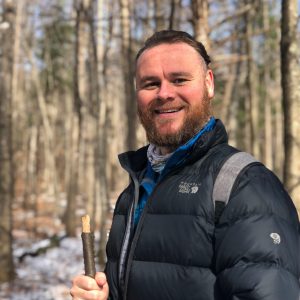 Michael Ramsey ’16 has a thing for meetings. Really.

“It sounds really lame,” the Amherst native said laughing. “People don’t get it. I don’t either. There’s just something entertaining to me about board meetings. It feels like an important event, where all your key stakeholders are coming together to make decisions.”

As the new town manager in Proctor, Vermont, Ramsey now has his fill of them. The town operates under a five-member elected Selectboard, which appoints a manager to handle the administration and general supervision of the town’s business affairs.

In addition to those meetings, Ramsey is responsible for leading a series of infrastructure projects for the town.

“Economic and community development really interests me,” he said. “I like to come up with creative ideas. Proctor, like most small towns and cities, is suffering from an exodus of big industry. So our job is to look at how we move forward and keep the economy sustainable.”

For Ramsey, possible solutions trace back to his time as an environmental studies major at Randolph and classes with Karin Warren, the College’s Herzog Family Professor of Environmental Studies and Science.

“She always talked about the triple bottom line approach: economic, cultural, and environmental sustainability,” he said. “How do we keep the town’s finances straight, while protecting the environment and maintaining the culture of the town? It’s something that’s stuck with me for a long time.”

He’s used those lessons throughout his career. After graduating, he worked for the Thomas Jefferson Soil and Water Conservation District as an urban conservation specialist.

In 2017, he joined the City of Waynesboro’s Public Works Department, eventually working his way up to senior utility operations coordinator, managing personnel and budgeting for the city’s sewer division.

“I was working right next to the director of public works, and across from him was the city engineer,” Ramsey remembered. “I just really enjoyed watching what they did and decided to go back to school to figure out how to do that, how to lead people.”

He went on to earn his Master’s in Public Administration from Ohio University, thriving as an online student while continuing his day job.

Vermont is a frequent vacation spot for the outdoorsy Ramsey, so he jumped at the chance to apply for the job opening in Proctor.

“I’m a conservationist at heart,” he said. “I knew I wanted to be a leader in a rural, small-town community that cares deeply about being good stewards of the surrounding environment.”

It’s also about serving the community, something Ramsey has done for most of his life.

He volunteered with the American Red Cross right out of high school, after Hurricane Katrina hit New Orleans, and did a stint in the Navy before coming to Randolph in his mid-20s.

“I want to be there to help,” he said. “I got an environmental studies degree to be a good steward. It’s just kind of been building from there. My academic and professional careers and my drive to help people has kept me going as a public servant. It’s probably where I’ll always be.”