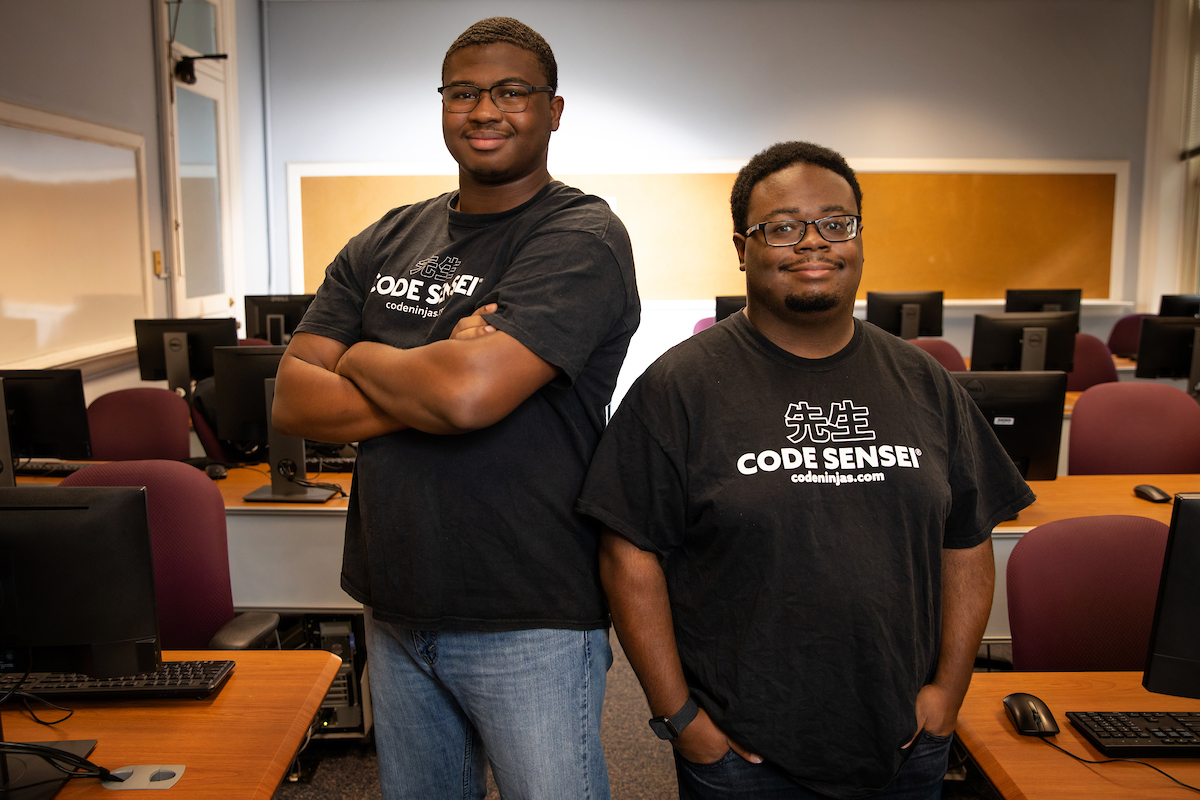 Terrell Rorie ’22 and Jaylan Thompson ’22 interned with Code Ninjas, a program where kids learn to code while building their own video games, this summer.

Both interned for Code Ninjas, a program where kids learn to code while building their own video games. As they gain new skills in coding, math, logic, and problem-solving, these students progress from a white to a black belt.

“We see technology and coding as a core component to their success,” said Ryan Clark, who worked with Thompson and Rorie at the two Code Ninja centers he runs in Florida. “No matter their goal, technology is ingrained in all we do. It is now a basic requirement for all of society, just like reading, writing, and arithmetic.”

Thompson and Rorie mentored more than 200 children, ranging in age from 5 to 15, during a series of weeklong summer camps at the two centers.

Thompson operated out of the Fleming Island location, while Rorie took on a leadership role at the then-newly opened Ponte Vedra center. It amounted to more than 500 hours of instruction and valuable experience for the computer science and math majors. Both are members of Randolph College’s esports team and host a podcast together about video games.

“They brought an infectious energy that encouraged their peers and our campers,” Clark said. “Along with his prior experience leading a podcast, Jaylan’s creativity and energy was a great fit for our music and YouTube camps. Terrell is very intelligent, communicates well, and has strong leadership skills. He led our Ponte Vedra location and built quite a following, teaching our camper ninjas in fun and intuitive ways.”

Clark works to identify the strengths of his interns and places them in roles that help cultivate those skills.

For Thompson and Rorie, that led to teaching courses in Minecraft modding and Roblox development, storytelling and game building from scratch,
LEGO robotics, and how to become a YouTuber.

They found themselves improvising at times, especially when a student mastered a skill quicker than they expected.

“That opened up a lot of new opportunities, when they’d ask us how to code certain things,” Rorie said, recalling the time Thompson tasked a camper with creating Marvel superhero Thor’s hammer inside Minecraft.

“He figured it out in 45 minutes, with the lightning bolt and everything,” Thompson added.

“There were lots of opportunities to really be creative,” said Thompson, who plans to go into software development. “And if I didn’t know something, Terrell would, or vice versa.”

Thompson also created a YouTube video introducing all of the camp’s senseis, and together with Rorie filmed a three-hour livestream when the Ponte Vedra location opened.

Rorie, who is interested in cyber security, said he’s gained more confidence from working with the students and alongside his fellow interns.

“It was pretty interesting how creative and unique everyone was, and how all of our teaching styles were different,” he said.
Code Ninjas recently received feedback from the parents of students who attended camp this summer—and Clark couldn’t have been happier with the results.

“They provided overly positive feedback and highlighted how Terrell and Jaylan really made the camps for their children,” he said. “Our Ponte Vedra location had a perfect score, meaning all parent feedback was a score of 9 or 10 out of 10. This is directly attributable to Jaylan and Terrell’s work and the camp culture they created.”