Greek Play to be presented live on Zoom 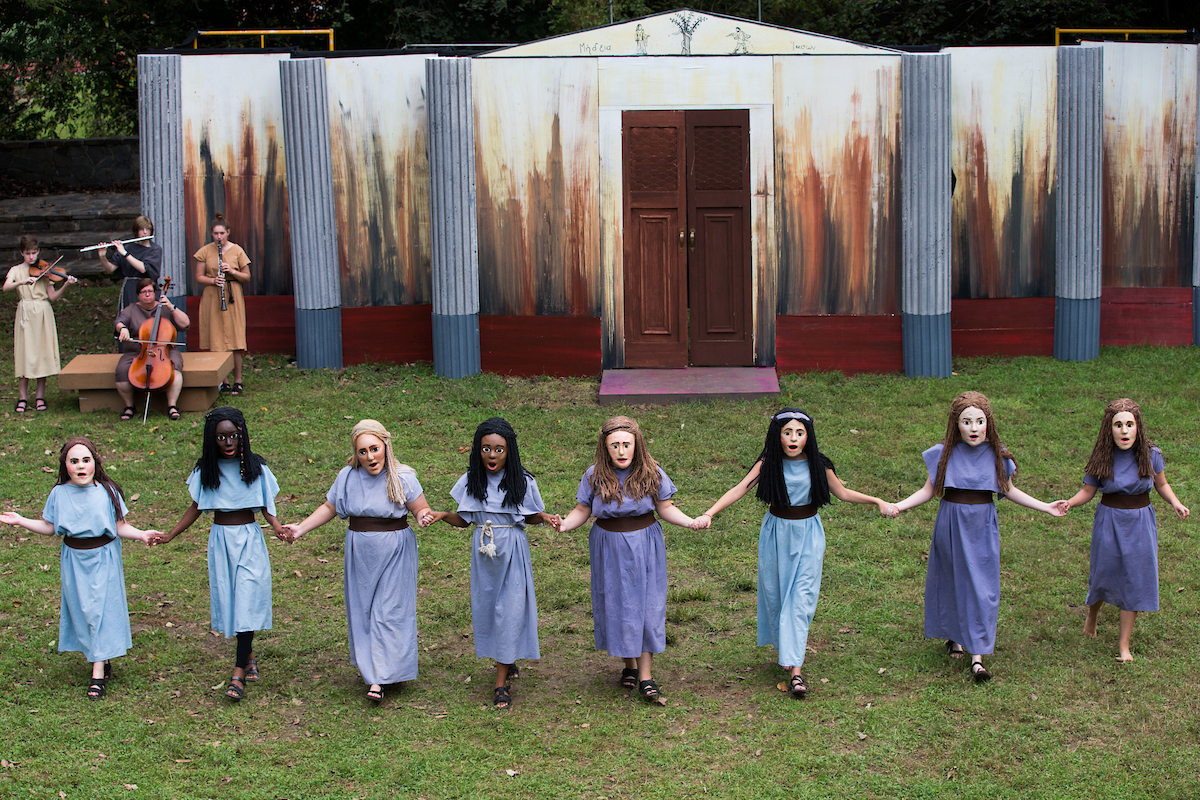 When she was casting Randolph’s 2020 Greek Play, Heracles & Deianeira, last spring, director Amy R. Cohen tasked her actors with showing a variety of emotions during auditions. But a common theme remained: Go big.

“During the last third of the play, Heracles is in agony, and I needed a little bit of that just to see if the actors were big enough and brave enough,” Cohen said at the time. “We don’t do wailing and big emotions very much as Americans or modern actors on small screens.”

The tragedy, traditionally referred to as Sophocles’ Women of Trachis, is about the titular married couple and a misunderstanding between them that causes Heracles to become very ill.

The production was moved to next fall due to the pandemic, but Cohen and her cast are presenting it via Zoom this weekend. Actors won’t wear the masks that have become a hallmark of the Greek Play. Instead, the presentation will be more along the lines of a reading, with some costuming elements.

The bonus performance presents its own set of challenges. Chief among them: How exactly do you “go big” on a computer screen?

“I think we’re finding some welcome surprises and similarities,” said Cohen, a classics professor and the Catherine Ehrman Thoresen `23 and William E. Thoresen Chair of Speech and Theatre.

“One of the things I believe and advocate for about Greek drama is how intimate it is, even though it’s in this giant theatre. We talk to the audience, and that means they are absolutely pulled into what we’re doing. So that directness they get used to pretty quickly in the Dell is right here on the screen. It’s been really interesting to think through.”

Cohen and Kaitlin Weigle ’21, who plays both title roles, have focused on how to convey the various emotions—particularly Heracles’s suffering—over the last few weeks.

“We’ve come up with some specific things to communicate it,” Cohen said. “When Heracles should be groaning, and when he should be moaning, which is something different. We have a whole list: a wince, a roar, hyperventilating, and when he’s trying to keep those things under control. All the credit goes to Kaitlin for coming up with ideas to have it be real while also having variety and keeping it in the frame. She’s doing a great job.”

The Greeks traditionally used as few actors as possible for speaking roles, apart from the chorus. Cohen said she’s always been struck by the contrast in pairing Heracles, the frantic, debilitated hero, and Deianeira, who is much more thoughtful and restrained.

Weigle, a senior theatre major, said their conversations have helped her channel both characters.

“It’s way out of my comfort zone,” she said. “We’ve been studying all the speeches and dialogue. I’ve really been enjoying the whole process of digging deep and learning all these acting skills to take into the real world.”

The process has been rewarding for Cohen as well. Everyone is busy, she said, but the time they’ve carved out for rehearsals hasn’t felt like work.

“It’s just been the most wonderful experience,” she said. “That deep thinking about how a speech is working and the discussions have been so refreshing. It is such a pleasure to spend time with these students learning this great work of art.”

Heracles & Deianeira will be presented on Zoom at 4 p.m. Saturday. For more information or to log on and watch, visit www.randolphcollege.edu/greekplay.