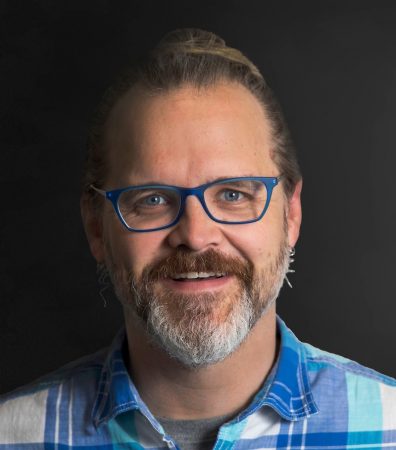 In Gary Dop’s absurd political comedy Deemocracy, the country is in the midst of its first digital election. Citizens don’t vote by ballot or in person but online by appointment.

The title character, Dee, whose struggles with decision-making are a frequent topic of conversation with her therapist, has the final appointment in the last open e-precinct—which becomes fodder for the media.

“It imagines somebody being forced to have cameras all around them on the day they are casting their vote,” said Dop, a Randolph English professor and head of the College’s Master of Fine Arts in creative writing program. “Network television and the candidates are suddenly in their face, and the world is watching to see what their perspective is.”

He wrote the play about two decades ago and, after a conversation with Stephanie Earl, a Randolph theatre professor, spent the past month rewriting it for a virtual reading that will be presented by students on Monday, the night before the 2020 election.

The play, Dop said, is a condemnation of both the media and politics.

““It’s very satirical and very funny,” Earl said. “It pokes fun at our political system and is thought-provoking. I really think people will enjoy seeing something like this, with the election we’re going through and the tense political climate. This play brings a lot of those moments to light and is an opportunity to laugh at it as well.”

Dop not only adapted the script to comment on the state of politics but also our daily lives in the midst of a pandemic. The entire play has been re-staged for Zoom.

“Why would I want them to do a reading of a script that is made for the stage when I can play with this moment and adapt it to be presented in this way?” Dop said. “I decided to shift it so that all the communication among the characters happens in Zoom or some digital conferencing system.”

“That allowed for a very different kind of approach,” he added. “Onstage, somebody can fall through a trap door or lights can go out. But, on a screen, you can instantly be gone. You can instantly be present. You can be gone in picture but present in voice. Somebody can come into your space that wasn’t invited.” Earl is keeping things simple for Monday’s presentation, with a few costuming and prop elements for actors—a cast of five, some playing multiple roles—to work with.

Dop has attended rehearsals and continued to rewrite his script, a process Earl is happy for her students to see.

“We’re working on this in the same way that any theatrical group would on a brand-new play,” she said. “Because the playwright is here, they can watch it as a living, breathing thing that continues to be tweaked. I’m sure he’ll continue to make changes until the day before we open. With a reading, you can do that. It’s exciting they’re getting the chance to experience that.”

It’s been just as rewarding for Dop.

“You trust the bones, but you know it can find a better form if you’re able to create a space in which you can be honest,” he said. “When you hear a play for the first time, when you hear actors reciting lines, it’s striking how much you understand what works and what doesn’t. You see so much. I absolutely love those moments. The process has been a great gift to the play and to me.”

The Randolph Theatre Department’s virtual presentation of Deemocracy is scheduled for 7:30 p.m. Monday, Nov. 2. Visit http://bit.ly/Deemocracy to access it.