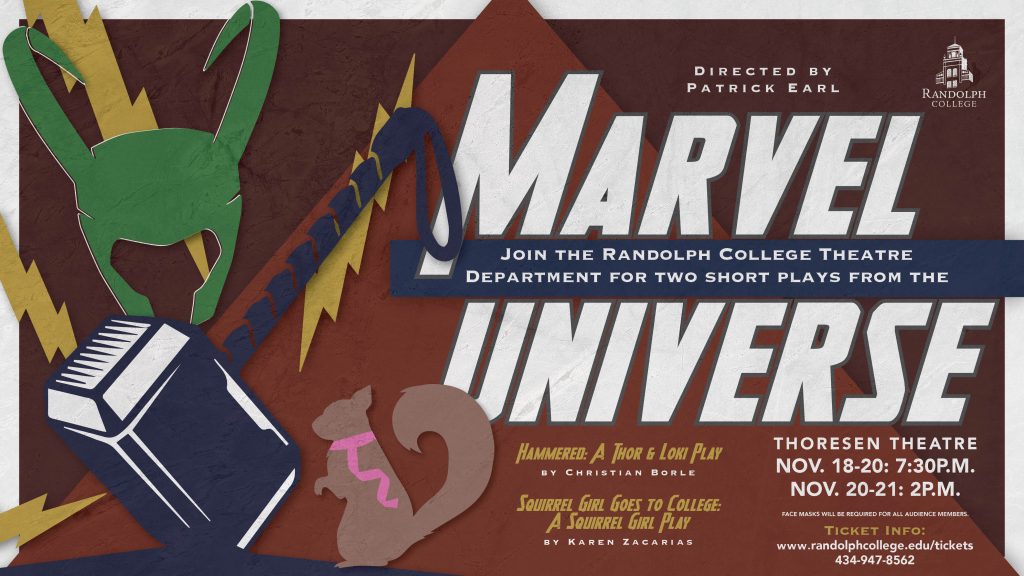 A superhero who can talk to squirrels. A high school graduation crashed by Dr. Doom. Another chapter in the match-up between always-at-odds brothers Thor and Loki.

Those are just a few of the plot points audiences can expect from Randolph College’s Marvel Double Feature later this month.

The College’s theatre department is presenting two one-acts, Hammered: A Thor & Loki Play and Squirrel Girl Goes to College: A Squirrel Girl Play, from Nov. 18-21. Both shows are part of a series of plays called Marvel Spotlight.

While Thor and Loki are well-known within the Marvel universe, the latter having just been the subject of his own Disney+ series, Squirrel Girl is a lesser-known, yet beloved entity.

“She’s always had this cult following,” said Patrick Earl, a theatre professor who is directing the show. “Some people have heard of her, and the ones that have are die-hard fans. Her claim to fame is as the only superhero to never be defeated, which is funny because she’s half squirrel.”

Squirrel Girl Goes to College finds her alter ego, Doreen Green (played by Sabina Sabat ’22) arriving at Empire State University, excited to make new friends, but struggling with whether or not to share her secret identity.

The show is narrated by her sidekick, a squirrel named Tippy-Toe (Lily Tacke ’23), and what Earl called a Greek chorus of squirrels. Tacke also provides moments of live music.

“Squirrel Girl has these little, five-line ditties at the beginning and end of the show,” Earl said. “Lily can play the guitar, so we thought, why not give her one? We’ve created an original tune with the lyrics that were given, so she has her own superhero theme song.”

For its part, Thor & Loki is underscored with the music of AC/DC.

The play is told through flashbacks, with an older Thor reminiscing about a prank Loki played on him in high school (the title, Hammered, comes into play). The younger versions of the brothers are played by Tanner Cochran ’24 and Chris Perez ’22, respectively.

All of the student actors are pulling double duty appearing in both shows, which are full of “Easter eggs” for fans of the comics and movies—with plenty of action and comedy to appeal to newcomers to the genre.

“The popularity of Marvel, it’s just so hot right now,” Earl said. “We chose these two because we thought they’d be the most successful. They’re super accessible and short, these perfect little chunks of story we can put together to make a single, cohesive night of theatre.”

Reserve your tickets online at www.randolphcollege.edu/tickets/2021/11/03/a-double-feature-of-marvel-plays, by phone at 434-947-8562, or purchase at the box office an hour before the show.