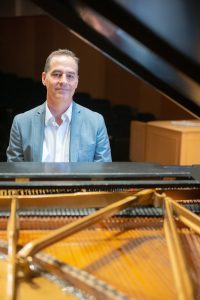 Randolph’s next Guest Artist Series concert will focus on the work of American female composers.

During the Nov. 7 recital, Roger McVey, a piano professor at the Lionel Hampton School of Music at the University of Iowa, will perform the work of Wynn-Anne Rossi, Emma Lou Diemer, Lori Latiman, Libby Larsen, and Caroline Shaw, the youngest recipient of the Pulitzer Prize in Music (2013).

McVey is a returning artist, who last appeared at Randolph in 2007.

“Our audiences will remember his energetic musicianship and the diverse repertoire choices he brings in his performances,” said Emily Yap Chua, music professor and director of the Guest Artist Series. “This program is no exception, consisting of works by living American composers who are all women. It’s a special opportunity, too: one of the pieces is a piano suite that was composed especially for him in 2016 by Libby Larsen. It’s not often we get to hear a commission performed by the artist it was written for.”

As part of his residency at Randolph, McVey has recorded an educational outreach video for Lynchburg City Schools and will give a class talk for students taking Chua’s Women in Music course.

The event, set for Sunday, Nov. 7, at 3 p.m. in Wimberly Recital Hall, is free and open to the public. Randolph requires masks indoors.