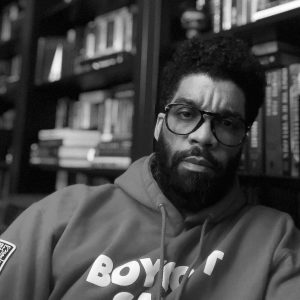 The virtual event will be available to view at 5 p.m. Monday, Jan. 24, on the College’s YouTube page.

“As a nation, we are in the midst of unresolved racial tensions and reckoning with new civil realities,” said Keesha Burke-Henderson, Randolph’s chief diversity officer. “As a community, we are in the midst of organizational change. I hope Dr. Rice can ignite our imagination about the possibility of contemporary activism and advocacy, to reinforce the spirit of ‘the Beloved Community’ and what it takes to create it.”

Rice—like King, a graduate of Morehouse—will discuss radical grace and the freedom work of now.

“He will be focused on radical honesty and accountability, highlighting the necessary and continuous work of freedom for all,” Burke-Henderson said. “He explains that grace is a result of the integrity and honesty of the work that is put in toward mending social crises.”

The former Danforth Endowed Chair of Psychology at Morehouse, Rice leads the Identity, Art and Democracy Lab, a research space that examines expressions of identity balance through engagement, the exploration of varied contexts, and personal narratives.

“Plainly, I look at the best part of how people adapt to a variety of contexts,” he writes on his website. “I have special interest in popular culture because of its capacity to inform perception and behavior.”

At Morehouse, he serves as a faculty member for not just the psychology department but also the film studies major and in African American Studies, with special focus on narrative studies. He is the founding director of Morehouse’s Institute for Social Justice Inquiry and Praxis and founding co-director of the school’s Cinema, Television and Emerging Media Studies Program.

The author of Balance: Advancing Identity Theory by Engaging the Black Male Adolescent, he frequently applies his research to cultural criticism.

Rice has provided commentary for NPR, C-SPAN, CBS News, CNN, and CNBC. His writing and opinion have appeared in The Washington Post, The New York Times Magazine, The Los Angeles Times, Vibe magazine, and The Root.

He has served on the editorial advisory boards for both The Journal of Negro Education and The Journal of Popular Culture, and his work is also represented in the Cornell Hip Hop Collection as part of the Adler Hip Hop Archive.

“I love the work,” he says on his website. “It can explain a healthy ‘us’ and can lead to deeper realizations of freedom.”