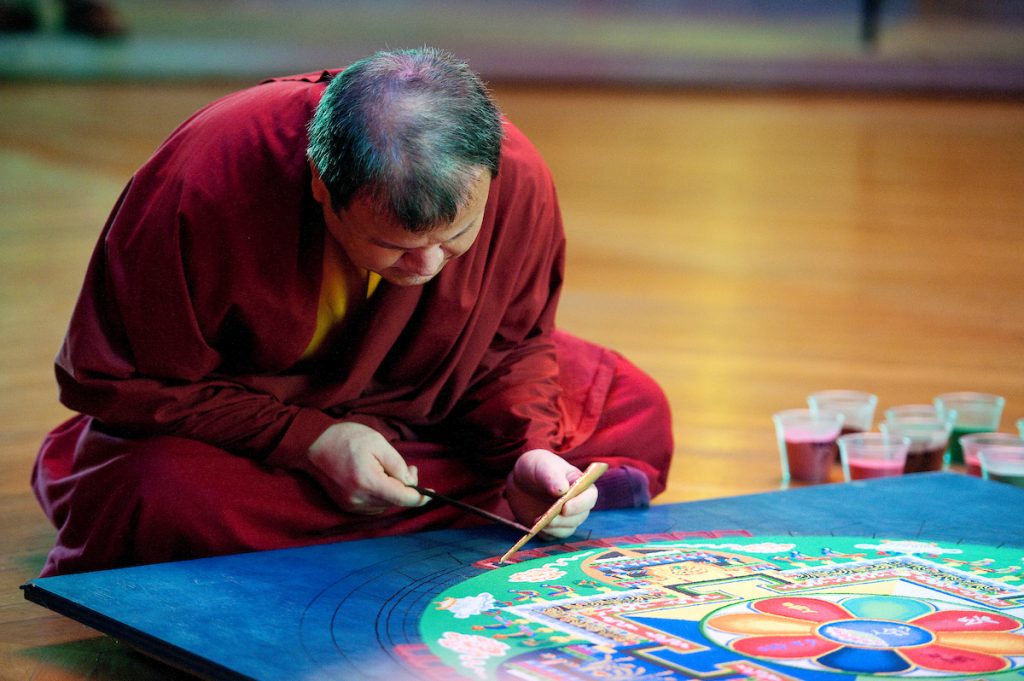 Tibetan monks created a sand mandala in Houston Memorial Chapel in 2013. Three lamas, spiritual leaders authorized to teach Tibetan Buddhism, will build one on campus the week of Sept. 13.

LIVESTREAM: Watch the monks build the mandala in real time or time lapse.

Three lamas from the Drikung Kagyu School of Tibetan Buddhism will construct a sand mandala on Randolph College’s campus later this month.

This is the third mandala created at Randolph. Previous ones were created in 2011 and 2013.

“I thought it would be a wonderful way to kick off the new year, when everyone is allowed to be together on campus again,” said comparative philosophy professor Suzanne Bessenger, who invited the lamas to Randolph to coincide with a first-year seminar that touches on the benefits of meditation.

After an opening ceremony at 10 a.m. Monday, Sept. 13, in the south wing of Lipscomb Library, they will work daily from 10 a.m. to noon and 3 to 5 p.m. on the mandala, which will feature the Buddhist goddess Vasudhara and her four male attendants.

The design is an uncommon arrangement for a mandala; Bessenger said it’s very rare to have a female deity surrounded by male deities.

The creation will be open for viewing each day in the library, with the lamas available for conversation and questions during that time.

Constructed from a special, very dense sand, the mandalas are an artistic representation of the divine world of a Buddha, and are meant to serve as an aid to visualization practices, as well as a way to consecrate the earth and heal its inhabitants. The lamas meditate while creating the mandala to ask for healing blessings on the environment and the people who view it.

A public talk, “Abundance and Mandalas in Tibetan Buddhism,” is scheduled for 7 p.m. Tuesday, Sept. 14, in Nichols Theatre, presented by Hun Lye, one of the lamas who will create the mandala. Lye is the founder and spiritual director of Urban Dharma in Asheville, North Carolina.

Lye will also lead two public teaching events in Nichols Theatre: “The Way of the Bodhisattva” at 9 a.m. Tuesday, Sept. 14, and a teaching on Tibetan Buddhism at 7 p.m. Wednesday, Sept. 15.

Both are part of weekly virtual events Lye holds remotely with students around the world.

At the end of the week, the mandala will be ritually dismantled, and its sand distributed to attendees, during a ceremony Saturday, Sept. 18 at 10 a.m.