Randolph faculty members lead 2-week off-campus seminars across a range of academic disciplines and in countries around the globe either during winter break, spring break, or the summer.

After completion of one semester of study, all students are encouraged to participate in these unique programs, which may have prerequisite courses and include pre-departure sessions and post-trip activities.

View archive of past Off-Campus Seminars

Please see Associate Provost Goodjohn in the Provost’s Office for more information on prices and financial aid available and watch portal announcements for dates and times of info sessions.

Christians, Jews and Muslims lived together in Spain for more than seven centuries in an environment that allowed science, art and literature to flourish. Through the study of art, architecture, and history, students will learn about key moments in Spain’s development from the fifth to the fifteenth centuries, including the Muslim conquest of the Iberian peninsula, the Christian “reconquest” against Islam, and the expulsion of the Jews. Particular focus will be given to the exchanges between these cultures, which while at times were in conflict, also shared certain aspects of their faiths and influenced each other’s forms of artistic expression. No prior knowledge of Spanish is required.

A History of Christmas in Germany and the United States

Christmas is among the most widely celebrated holidays on earth, yet its history is not as straightforward and its traditions not as old as one may assume.  This course explores the evolution of Christmas by examining its pagan roots, the biblical accounts, the metamorphosis of the real-life St. Nicholas into Santa Claus, and the influence of literature, movies, television, music, commerce, and national customs, particularly in Germany and the United States, in shaping what we know as Christmas today.  The class will also study Christmas’ impact on other holidays, most notably Hanukkah, as different traditions face the juggernaut of this Christian but increasingly secular celebration.

No two countries have influenced the celebration of Christmas more than the United States and Germany.  Germans, for example, invented the glass Christmas ball, the Christmas nutcracker, the Advent wreath, the Advent calendar, and the Christmas tree.  Christmas markets, a centuries-old German tradition, have spread throughout Europe and the United States.  From the Americans, examples include the modern and now globally recognized image of Santa Claus, scores of songs and movies, and the overwhelming commercialization of the holiday.  Focusing on the origins of these two countries’ traditions and comparing how the religious, historical, cultural and economic forces have shaped the holiday in these two different cultures, students will come to a greater understanding and appreciation of the influence of this global phenomenon while improving their critical thinking skills through reading, writing, listening, and discussion.

Students will keep a journal while traveling in New York City and Germany, in which they will reflect upon their experiences with the group and on their own time.  These reflections are expected to evidence critical distance, analysis as well as narration, and an effort to connect varied trip experiences with one another as well as with things engaged in the Session II class.  Students will also present an account of their experience at an appropriate forum open to the college community in the following semester. 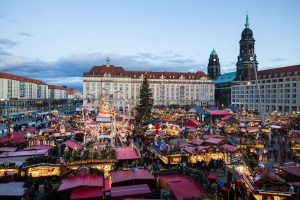