In the limelight: Theatre course introduces students to basics of special effects, lighting, and sound 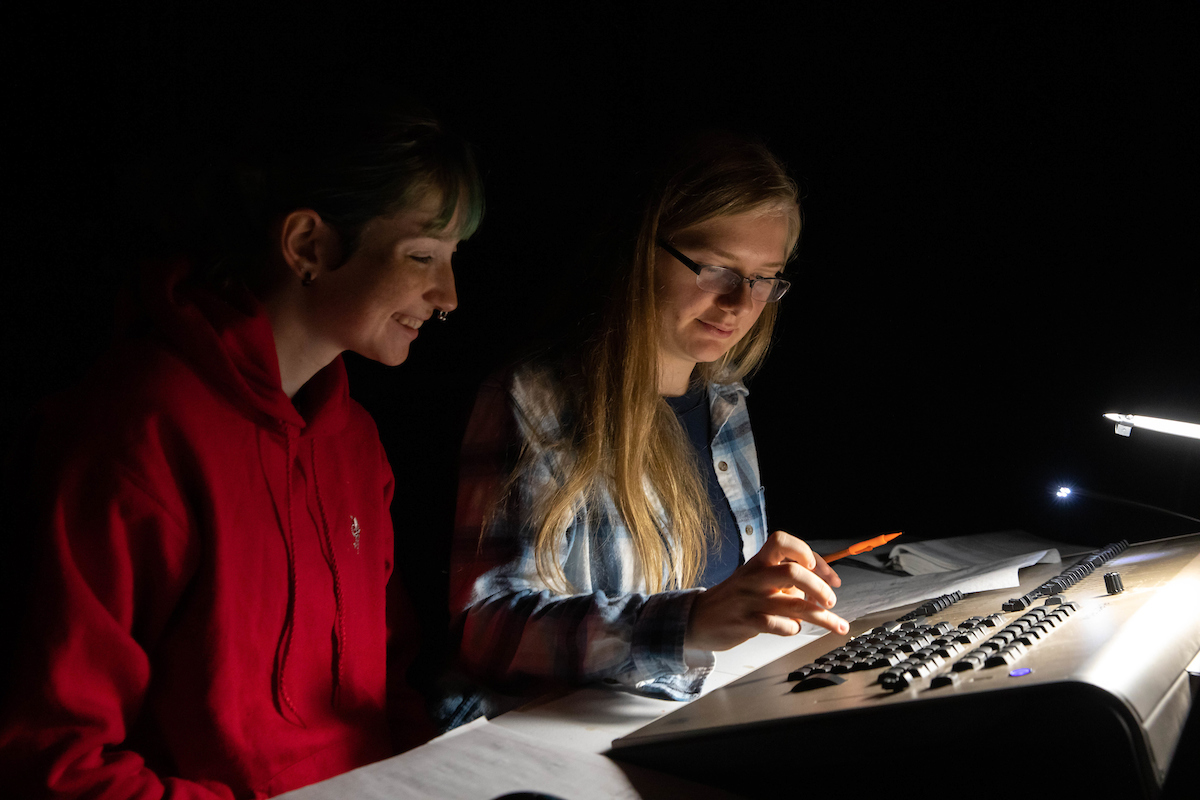 Harper Whetzel ’23 and Laura Rowland ’24 work on the sound board during their Special Effects, Lighting, and Sound course.

The familiar strains of Queen’s “Under Pressure” rang out in Randolph’s Lab Theatre, the overhead lights pulsing with the beat.

The only other light in the room came from a lamp pointed at the lab’s lighting console, where Laura Rowland ’24 played maestro to the show—a mid-session project for professor Heather Sinclair’s Special Effects, Lighting and Sound course.

The fall class offered an introduction to the professional standards and practices of each design area, with an emphasis on how they support and enhance theatrical productions. 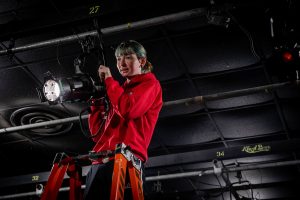 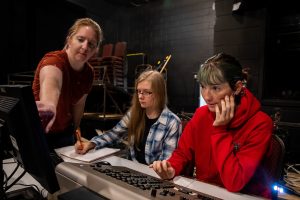 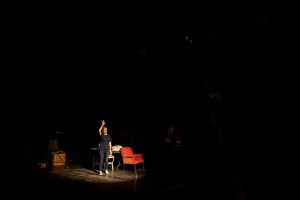 For this particular project, Sinclair tasked Rowland and classmate Harper Whetzel ’23 with designing a light show around a song of their choosing—the Queen classic for Rowland and, for Whetzel, a song by her favorite band, 21 Pilots.

“I picked the one that would have the best vibe if you were at a concert,” said Whetzel, who incorporated strobe effects into her show.

Topics covered in the interactive course included photometrics, lighting control, recording and sound creation, acoustics, sound reinforcement, atmospherics, and practical stage effects. Each project built on the next, with a final design that combined all three areas.

“I’m a hands-on learner,” said Whetzel, a theatre double major who is studying both acting and design and technology at Randolph. “That’s one of the reasons why I like this class. I get to work with my hands so much.”

This is the first time the course has been taught in this way, with all three disciplines combined. Sinclair built several buffer days into the seven-week session, so they’d have time for in-depth discussions along with the hands-on work.

“If students have questions, I’ll pause the class so we have that time to get into it,” she said.

On that particular day in mid-September, Rowland and Whetzel were working together to set up their respective projects, climbing up and down ladders to change out the color gels in each light before taking their turn at the console.

In a professional setting, each aspect of the work would be its own job. The lighting designer and sound designer would collaborate to bring a production to life onstage. There would also be a master electrician hanging and repairing the lights and a programmer to helm the lighting board.

This class experience challenged Rowland and Whetzel to take on all of those roles.

Rowland, a biology major, has worked behind the scenes on the College’s theatre productions in the past and wanted to learn more about electrical engineering and carpentry.

“The class offers a whole variety of different things I like, all combined,” she said. “It’s a good learning experience.”

For Whetzel, acting is a primary focus, but she’s used her time at Randolph to explore backstage work as well. Prop design is another one of her passions, and she served as props master for the fall theatre production, Dr. Faustus.

“The world of acting is a hard industry to get into. It’s a one-in-a-million chance,” Whetzel said. “I’m the type of person who has a Plan A through Z. I want to be versatile and have an understanding of every aspect of theatre.”