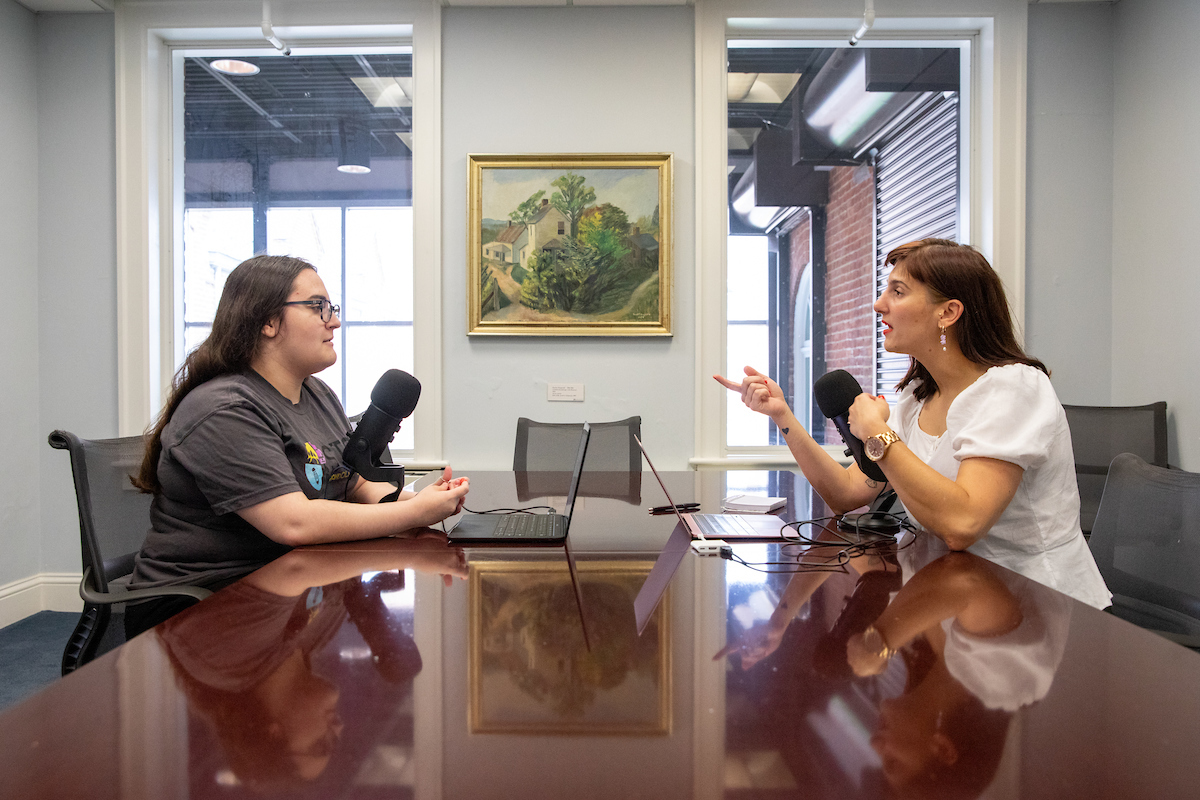 Isabel Stephens ’23 and professor Justina Licata record an episode of their podcast, “A Step Toward Justice.”

Isabel Stephens ’23 was convinced she wanted to do a summer research project about reproductive justice, the current focus of Randolph’s American Culture Program.

And Justina Licata, the College’s Ainsworth Visiting Professor of American Culture, knew just how to do it.

This summer, Stephens and Licata are shining a light on the movement through a podcast they’ve researched, written, and recorded themselves during the program’s eight weeks.

Created by women of color and indigenous women in the 1990s, reproductive justice refers to unlawful controls placed on minority women’s bodies and how they experience reproductive health discrimination differently than white women.

“It’s a wonderful opportunity to learn, to focus on an area of history that I had not studied and that I think is becoming an emerging and ever-important topic, especially in the political climate and the social climate we are finding ourselves in,” said Stephens, who is double majoring in history and theatre. “Podcasts reach a much wider audience than an academic paper. We wanted to contribute to public history and the general conversation around these issues.”

The format also falls in line with the spirit of the reproductive justice movement’s origins.

“It’s not an academic movement,” Licata said. “It is a movement of activists and of people who are working in communities.”

After a couple weeks of initial research, she and Stephens began recording episodes, naming the podcast A Step Toward Justice. The plan is to do a total of about seven, each beginning with a discussion before leading into the featured topic. 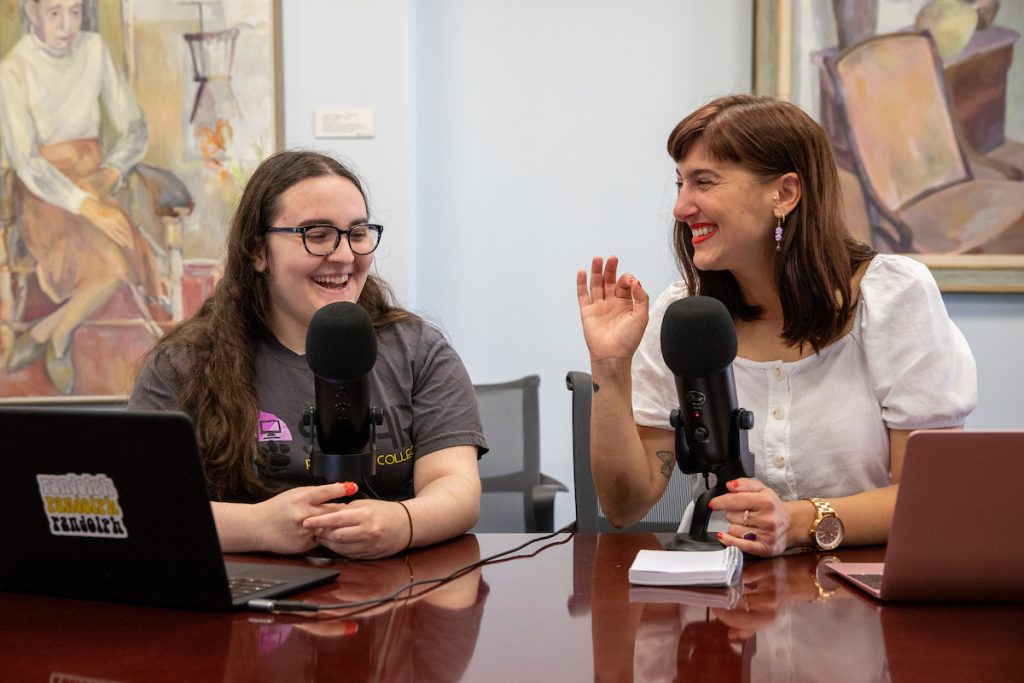 Isabel Stephens ’23 and professor Justina Licata record an episode of their podcast, which was released in early July.

The first episode was posted at the end of June, and new installments will be posted weekly on Apple Podcasts and Spotify.

The work is pretty evenly divided between them, with Stephens focusing on topics that include the history and evolution of reproductive justice and how it’s been impacted by the rise of social media; the roots of scientific and medical racism; and reproductive justice issues related to the LGBTQIA+ and disability communities.

“Those communities are very often, and historically, ignored,” Stephens said. “I think it’s important to talk about them in ways they aren’t often talked about.”

One episode will feature an interview with scholar Rebecca Peters, a religious studies professor at Elon University who has written about the connections between Christianity and reproductive justice.

Licata plans to do an episode linking the history of sterilization practices and eugenics, which she’s studied extensively, with allegations of sterilizations in ICE detention centers last fall.

Another will focus on abortion clinic escorting, work Licata has done herself over the last few years.

“There’s not a lot of histories written about clinic escorting, which has really been around since the late 80s and early 90s,” she said. “It’s overwhelmingly white, cisgender women who participate in this. So I want to do interviews with clinic escorts across the country, seeing what issues arise in different locations and regions. Then also, ask the question of why is it overwhelmingly white women who participate in this?

“This is another one where social media might be really interesting,” she added. “I have some friends that are clinic escorts who are big on TikTok. How are we using social media to get more attention around these issues?”

Stephens and Licata hope to do just that—create more awareness and education around the topic.

“A lot of times, students haven’t heard the term, but they’re aware of the issues even though they weren’t thinking about them in those terms,” Licata said. “For the podcast, we’ve chosen to explore things Isabel was already interested in, and she’s reframed them through this lens of reproductive justice. It’s something that is part of so many important, relevant conversations.”