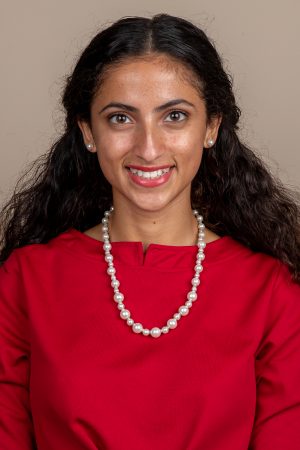 When Ninfa Amador-Hernandez ’23 and a group of classmates revived the College’s Young Democrats Club last spring, they began networking with other chapters around the state.

She was one of four Virginia students who participated in the town hall. In addition to posing their own questions to Warner, the student panelists also answered questions from those watching at home.

COVID-19 loomed large during the town hall with questions for Warner about inequities in healthcare access, both on campuses and across the country, and for the students about how the virus has affected their education.

Amador-Hernandez, a junior senator for Randolph’s Student Government, inquired about the possibility of future legislation including any relief for college students.

Warner said he’d like the next relief bill to be targeted toward the people who are most in need and pivoted to discuss options for student loan deferment and lower interest rates.

Amador-Hernandez was pleased with the diversity of the panel, which included students from two historically black universities—Hampton University and Virginia State University—and the College of William & Mary.

“We were able to get our perspectives across to Sen. Warner about how students feel,” she said. “I think the questions highlighted certain aspects of what’s going on that are important, especially from our HBCU partners. COVID has been extremely hard, but certain aspects of society have been hit harder than others. It’s good to be aware of that.”

Warner ended the town hall by complimenting the students and their hard work.

“I have enormous respect for all of you,” he said in his closing remarks, noting how difficult and stressful times are right now. “One of the things that will make it less hard is if we can get you some more resources, if we can take some of the financial stress off of you.”

He also encouraged them to get involved and vote.

“I would ask you all, as much as you can, to be involved,” Warner said. “It’s so important that you vote because you shouldn’t leave all this to the politicians. We need your ideas. We need your input.”