Randolph’s professors ranked 12th in the nation for accessibility 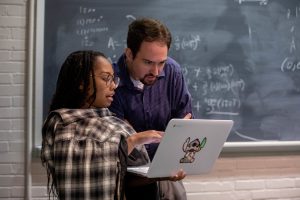 Randolph College’s professors have once again been recognized as some of the best in the nation.

The Princeton Review ranked the College 12th for most accessible professors in the 2023 edition of its college guide, The Best 388 Colleges.

“My academic experience has been challenging, there’s no doubt, but the professor support has made that challenge enjoyable and exciting,” one student told the guide, which emphasized Randolph’s small class sizes and close student-faculty relationships.

Another student described the professors at Randolph as “knowledgeable, understanding, and helpful to students. The number one goal is always to make students better thinkers.”

Randolph was also included on the Green Honor Roll and a web feature, 2023 Best Colleges: Region by Region, recognizing colleges that are academically outstanding.

In a “Survey Says” sidebar, The Princeton Review lists topics students were in most agreement about in their answers to survey questions. At Randolph, that included internship offerings, an active student government, vibrant class discussions, and an environmentally aware student body.

The Princeton Review has published its Best Colleges guide since 1992 and only about 14 percent of America’s four-year colleges are included. The rankings are tallied based on surveys of students who rate and report on various aspects of their campus and community experiences.

Randolph has been included on numerous lists over the years, including #16 for Most Accessible Professors in 2021.

The College also appeared in the 2022 edition, which didn’t rank institutions like in previous years. Timed to the book’s 30th anniversary, it instead featured a specially curated selection of lists identifying schools that had the most impressive history of appearances on its top 20 colleges rankings over the years.