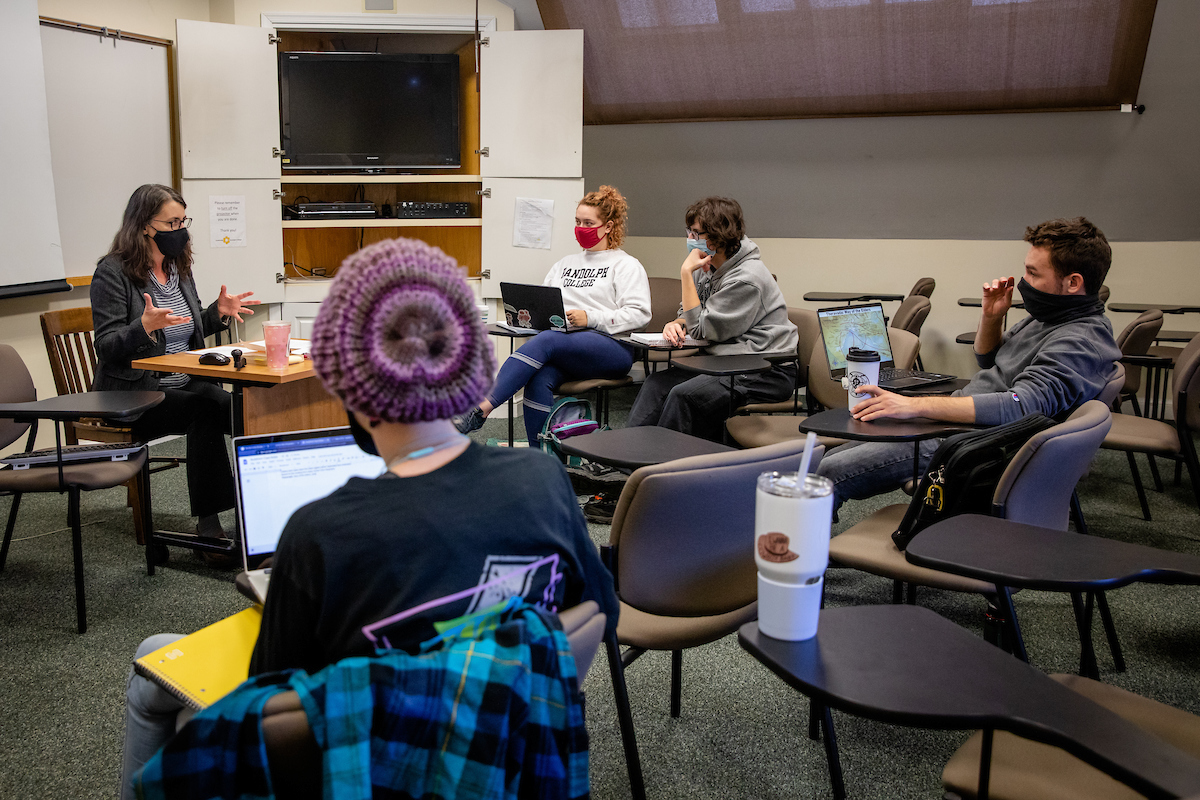 Suzanne Bessenger, formerly of the religious studies department, is now part of the College’s new comparative philosophy department. Her expertise is in Asian thought and, next year, she’ll teach a seminar on Gandhi. 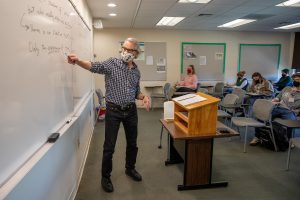 David Schwartz, the Mary Frances Williams Chair in Humanities, specializes in applied ethics, and many of his courses will remain in the comparative philosophy curriculum.

Randolph’s move to create a new comparative philosophy major, which brings together the College’s religious studies and philosophy departments, was about more than just combining the two disciplines.

“It’s now something that has an entirely different curriculum than either department would have ever had under almost any conditions,” said Gordon Steffey, Randolph’s Barbara Boyle Lemon ’57 and William J. Lemon Professor of Religion and Philosophy. “It really is something new that isn’t being done in other parts of the country. We’re offering something unique that meets this generation of Randolph students.”

Now a department of four, they’re excited to work together and provide students more of what they’ve already been drawn to in the individual departments.

The new major focuses on three primary areas of interest, grown out of what Mortensen called “really cool synergies in our areas of expertise”: mind and meaning, ethics and justice, and art and culture.

Most philosophy departments focus primarily on Western philosophy. Randolph’s will broaden that focus to include Eastern traditions like Buddhism as well as African, Latin American, and Islamic traditions.

“This allows us to be more global in our offerings and design courses that really speak to real-world interests,” said Schwartz, the Mary Frances Williams Chair in Humanities. “Gordon and Suzanne do that work, and students are interested in these other traditions.”

Bessenger brings expertise in Asian thought and Steffey in continental philosophy and critical theory, Islamic and Jewish philosophy, and philosophies of the southern hemisphere.

Schwartz specializes in applied ethics, and many of those courses will remain in the curriculum, such as Ethics and Public Life, Bioethics, and Environmental Philosophy.

All four faculty members will contribute new courses that engage issues of the day, including Crime and Punishment; Anger, Anxiety, and Moral Concern; Death, Dying, and Other Opportunities; and Faith and Doubt.

Schwartz’s classical philosophy course and Mortensen’s early modern philosophy course have been combined and evolved into a new one called Ancients and Moderns that will be required for all students majoring in comparative philosophy.

From there, the course catalogue includes everything from Islamic Thought, Philosophies of Latin America, and Chinese Philosophy to Practical Reasoning, Logic, and Epistemic Injustice.

There are also courses focusing on Hinduism and Visual Culture, Gender and Buddhism, Philosophy and Animals, Buddhist Thought and Film, and Existentialism.

A junior seminar, called On the Shoulders of Giants, has also been added; each session will focus on the life and work of one philosopher, taught on a rotating basis by the faculty members. Bessenger is up first and will be teaching about Gandhi next year.

“Philosophy teaches us how to question things we take for granted, and the best way to do that is to look at things from multiple perspectives,” said Mortensen, whose area of expertise lies in philosophy of mind and epistemology. “It’s about how we navigate being human, being moral, and making a life.”

The new department comes on the heels of the launch of Randolph’s new curriculum model, TAKE2. Bessenger said the timing feels appropriate.

“At this point in the College’s history, it’s a moment of real transformation,” she said. “We used that moment to think about what students need in terms of their interests and what they want to go on and do after they finish at Randolph.”