‘A person who strives to make our communities better’: Ninfa Amador-Hernandez ’22 works with immigrant advocacy organization 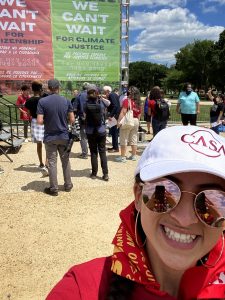 Ninfa Amador-Hernandez ’22 is interning with CASA, an immigrant advocacy organization, this summer.

Over the years, it has broadened its services to provide critical programs to working-class and immigrant families from Pennsylvania to Virginia—work Ninfa Amador-Hernandez ’22 has been familiar with for quite some time.

This summer, she got a firsthand look at the nonprofit’s efforts as a CASA research and policy intern.

“They have been advocating on behalf of the immigrant and undocumented community for a very long time now, and I have even benefited from their advocacy,” she said. “I had joined their rallies and protests for immigration reform way before I thought about working with them as an intern, so the transition was fairly smooth.”

The work is something that resonates with Amador-Hernandez, who also interned with the Massachusetts chapter of Moms Demand Action for Gun Violence this spring.

“I really liked the community service aspect,” she said. “I wanted to continue my policy and lobbying work serving those around me.”

Amador-Hernandez worked on several of the nonprofit’s projects, including a health care campaign for uninsured residents of Prince George’s County, Maryland. 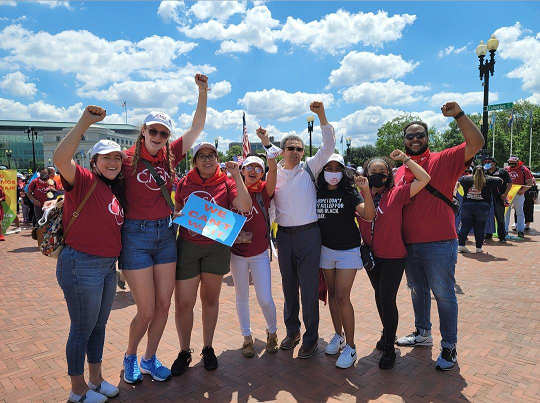 Ninfa Amador-Hernandez, fourth from left, at the We Can’t Wait Rally and March in June.

She also helped gather information and draft a report about the state of Black immigrants in the United States.

“This immigrant group tends to be forgotten due to the intersectionality between race and immigration status, and faces more obstacles and policing compared to non-Black immigrant groups,” she said. “There are not many reports on Black immigrants in the U.S., so data gathering to better help this population is much needed.”

Amador-Hernandez, who is interested in policy work and legislation, was able to join CASA board members on a call interviewing candidates for both the governor’s race and local county races.

“All of my internships have broadened and sharpened my skills, but this one by far has shaped my political beliefs and career plan the most,” she said. “I hope to make connections and networks that will allow me to further my future role as a public servant or just a person who strives to make our communities better.”