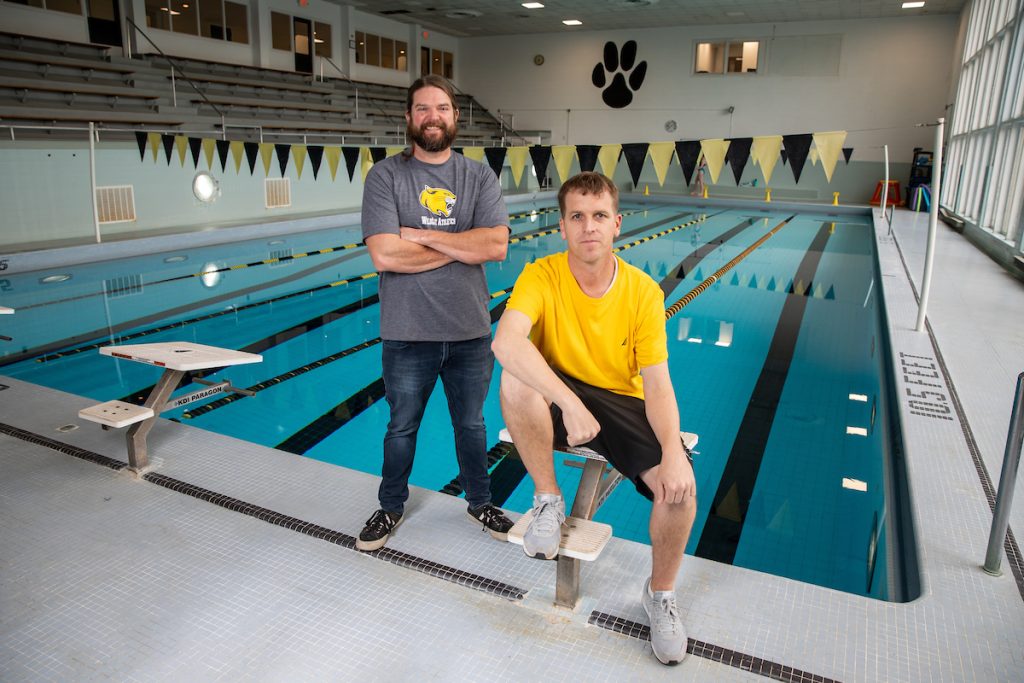 For more than a decade, the longtime friends coached side-by-side during swim practices for two Lynchburg high schools—Lewis for Brookville and Hofmann for Heritage. During the season, their practices were scheduled at the same time, on the same deck, at the local YMCA.

“There wasn’t a day that went by where we wouldn’t meet in the middle and talk about swimming, talk about life,” said Hofmann.

Now they’re taking that camaraderie to Randolph as co-head coaches of the men’s and women’s swimming team.

“We are very fortunate to add not one, but two quality head coaches in Lee and Greg,” said Director of Athletics Tony Berich. “The combined experience they bring is second to none. But more than that, it was the dedication and passion for swimming they exude that stood out. They came in with a clear, concise plan for the direction of the program, and we are very excited to see the new heights Randolph swimming will reach under their guidance.” 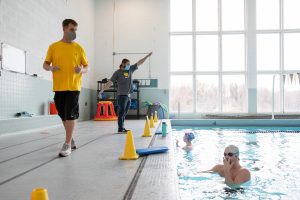 The pair’s bond may have been cemented during their high school coaching days, but their first meeting took place at a different pool, back when their summers were spent almost entirely in the water. Lewis and Hofmann competed in the same recreational swim league associated with their neighborhood pool.

Hofmann, who was in elementary school when Lewis was a high schooler, remembers the admiration he had for him, especially when they competed on the recreational team.

“Lee was one of the best, if not the best, swimmers on the team,” Hofmann said. “He was always somebody that I looked up to as a role model because he was an older swimmer who was successful.”

Lewis went on to swim for the University of Mary Washington, where he graduated in 1996 after a long swimming career. A co-captain of the swim team, he was a 16-time All-Conference award recipient and led the team to titles in 1993 and 1996.

At one point, he even coached Hofmann, while they were in the recreational league, and could see hints of what was to come even then.

“You could always tell he was going to get into coaching,” Lewis said. “One thing I take pride in is trying to really put a strategy together and positioning athletes so they can be successful. That’s something Greg developed early on.”

Hofmann swam for Old Dominion University, graduating in 2003, and was a Colonial Athletic Association finalist in 2002. Like Lewis, he began coaching when he returned to Lynchburg and later established the Virginia Gators of Lynchburg, a year-round competitive swim team.

At Heritage, he teaches health and physical education and has coached the boys and girls swim teams since 2005. He was named the Virginia High School League Conference 30 Coach of the Year in 2016 and 2017.

Hofmann will continue his teaching role at Heritage High School, but will no longer coach. Lewis plans to coach his Brookville team, which includes one of his three sons, for one more year.

Their connections to the local swimming community should help build a pipeline of athletes to Randolph; they’ve set a goal to have 20 men and 20 women competing by 2022.

Each has their speciality—Lewis was a distance swimmer and Hofmann a sprinter—with similar coaching styles and personalities.

“We’re both very loud and motivational, and we like to have fun,” Hofmann said. “Lee and I are both very big advocates in quality practice over quantity. All of our practices will have a focus and will be more than swimming back and forth. We want to do things to keep the swimmers fresh, where they’re trying new drills and techniques.”

Hofmann and Lewis also hope to foster the same sense of camaraderie they had back when they were younger.

“We want to challenge these swimmers to do the best they can,” Lewis said. “But we also want to make it a memorable experience.”