Phuong Tran ’15 is working to shine a light on underrepresented groups in Richmond, Virginia.  Photo by Parker Michels-Boyce

Social media sometimes gets a bad rap, but Phuong Tran ’15 often gets to see the positives firsthand through her job with the American Civil Liberties Union of Virginia (ACLU-VA).

“It can be used for good, to share information and to build a community,” she said. “It can bring people together, especially during COVID-19.”

Tran joined ACLU-VA in 2016 as a part-time employee. She worked her way up to a communications associate and is now serving as the digital communications manager. That promotion led to less day-to-day social media management and more strategic planning and big-picture thinking. 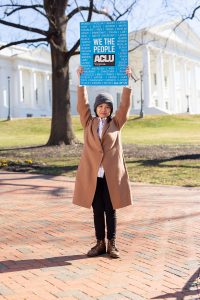 It also landed her a spot on Style Weekly’s Top 40 Under 40 list for 2020, which recognizes those who are making a difference in Richmond.

“We had a small community at Randolph when I was there, and I cared about the people around me,” she said. “I brought that spirit with me when I started working here. I care about the community here in Richmond.”

“We want to be a bridge between lawmakers and the people,” she said. “We try to analyze all of the legislation being proposed, then identify issues, identify room for improvement, and look for ways to educate the public. There are people who are directly impacted by these laws and legislation, and they need to be in the room.”

The ACLU-VA focuses on a wide range of issues but is currently emphasizing police reform and workplace discrimination. Another issue on the forefront is addressing the needs of those who are incarcerated.

“We get letters from prisoners every day really raising serious issues,” Tran said. “There are a lot of heartbreaking stories and a crisis going on that is hidden away from the public eye.”

It’s harder to shine a light on some of those issues, she said, because of misconceptions about the inmates themselves.

“Many of them are struggling with mental illnesses that need to be treated. Throwing them behind bars is sweeping it under the rug,” Tran said. “And if you don’t treat them well when they are behind bars, when they get out, they are likely to reoffend. There are a lot of issues we feel like people should know about.”

Tran has worked to shine a spotlight on other overlooked groups through another passion, her photography. She’s been documenting Richmond’s homeless population, which has grown in the wake of COVID-19. The city now has the second-highest eviction rate in the country.

“My main goal is to humanize people on the streets and share their stories,” said Tran, who has been posting the images to her personal Instagram page. “We can’t truly solve the problem of homelessness without first acknowledging the people who are living it every day and recognizing them as members of our society, not nameless people who live in the shadows.”

Connecting with her subjects and hearing their stories keeps her grounded in her work at the ACLU-VA and as a member of the community.

“I’m trying to make life a little bit better for the people around me,” she said.

It’s the same at the ACLU of Virginia.