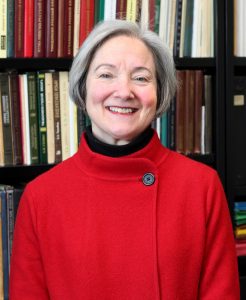 Alice Harris ’69 was in her third year at the College, majoring in English, when she discovered what would eventually become her life’s work.

“I spent my junior year at the University of Glasgow,” said Harris, who retired from the University of Massachusetts at Amherst’s linguistics department in 2020. “If you’re an English major, you take certain courses. We had a lecturer on the history of the English language. I didn’t want to go. I was only interested in literature, but I was the sort of student who went if I was supposed to. And I was fascinated by what this man was talking about.”

Harris credits those weekly lectures with creating a spark that led her to find linguistics, the scientific study of language and its structure. She went on to earn two degrees in it, a master’s from the University of Essex in 1971, and a Ph.D. from Harvard in 1976.

Just recently, Harris was named a British Academy Fellow, one of more than 1,400 leading academics chosen for their contributions to subjects within the humanities and social sciences.

She is among 30 Corresponding Fellows, the designation for those who don’t live in the U.K.

Harris, the only fellow chosen in linguistics in 2020, brings a long, distinguished career to the table.

She spent two years as a research fellow in linguistics at Harvard in the late 1970s before heading to Vanderbilt University, where she was a professor of linguistics and anthropology and chair of the Department of Germanic and Slavic Languages. She later taught and served as director of the Ph.D. program in linguistics at SUNY Stony Brook.

Much of her work has been in historical linguistics, which involves the reconstruction of ancestral languages. It’s something she’s written about often, including in her 1985 book, The Kartvelian Case.

Her work has been recognized frequently over the years, including with the College’s Alumnae Achievement Award in 2004. She was also recognized with a Guggenheim Fellowship in 2009; the Erskine Fellowship from the University of Canterbury in New Zealand in 1999; and a fellowship at the Norwegian Academy of Science and Letters Center for Advanced Study in 2004, among other honors.

Harris has frequently been involved with the Linguistics Institute, a gathering of top linguistics students and professionals in the field sponsored by the Linguistic Society of America.

The new fellowship with the British Academy will enable her to expand these connections with academics all over the world.

The Academy functions in three primary roles—an independent fellowship of scholars; a funding body that supports new research, both nationally and internationally; and a forum for debate and engagement—with the ultimate goal of deepening the “understanding of people, societies, and cultures, enabling everyone to learn, progress, and prosper.”

Fellows are encouraged to sit on policy committees, oversee research, assess applications for research funding, generate funds, and interact with the public.

In addition to sponsoring events and publishing newsletters, blogs, and books, the Academy is occasionally asked to provide advice to governmental bodies. Recently, it was commissioned by the U.K.’s Government Office for Science to develop a report on the effects of COVID-19 on society.

While COVID-19 has put a damper on the usual gatherings to celebrate new fellows, Harris hopes to eventually make it across the pond to visit.

“There are honors that a person dreams of winning, but I never even dreamt of this,” Harris said. “I feel that election to the British Academy validates my research career—the topics I chose to work on and the overall importance of my findings.”

She will continue that research in retirement, while also finding time for other pursuits like writing and a newfound love of hiking with her husband.

“People in the humanities almost always keep going after retirement,” she said. “Some people retire so they can spend more time doing research. That was not my case. I’m trying to do other things.”