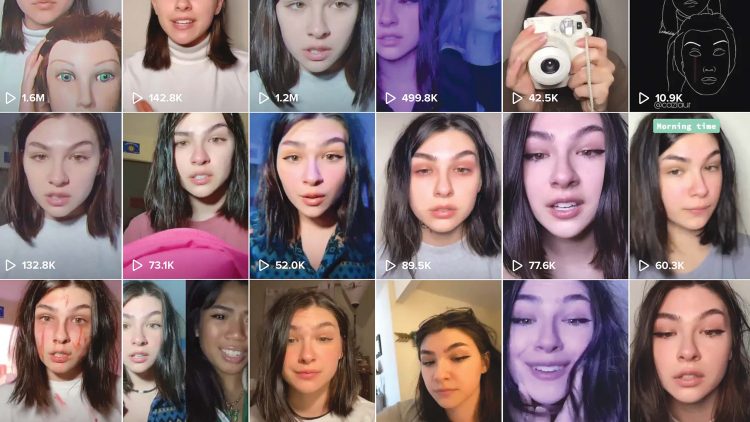 On TikTok, Cassidy Carter ’22 mostly posts “Point of View” videos, in which she provides a sort of commentary on social issues or everyday life events. She finds inspiration by looking at what’s trending on the app at any given time.

Cassidy Carter ’22 was scrolling through one of her favorite meme accounts on Instagram last summer when she came across a video that caught her attention. The video was made on TikTok. Curious, she downloaded the app and gave it a try.

“I started out just making TikTok videos for fun,” Carter said. “Then one day I made this video that I thought was really stupid, but it ended up getting a lot of likes. From there I made more, and they just started blowing up.”

TikTok can best be described as a social network for amateur video makers. Users create their own short (15 second) videos using snippets of music. Some of the videos are funny, while others are serious. The popular social media platform is currently the single-most downloaded app for middle school through college-age students.

Carter’s TikTok profile (@cazlaur) has gained huge amounts of followers—nearly 225,000, including 8.8 million likes. She mostly posts “Point of View” videos, in which she provides a sort of commentary on social issues or everyday life events. She finds inspiration by looking at what’s trending on the app at any given time.

“I’m always thinking about different ideas for videos that could get a lot of views and likes,” Carter said. “It’s kind of a learning thing based on responses. If I see a video isn’t doing well, I figure out how to switch it up for the next one. Or, if a video is getting a lot of attention, I try and replicate the things people liked.”

A commuter student from Appomattox County, Carter records most of her TikTok videos at home in her bedroom. One of the few times she ever recorded in public was when she tried to recreate a popular dance move in an airport during a family vacation.

“I learned the dance and for the whole vacation I was practicing,” Carter said. “When it came time to do it, I did it, but it wasn’t good. I was really embarrassed and started laughing part of the way through. No one was paying attention, but I felt like everybody was watching me!”

A psychology major, Carter decided to use her Internet fame for academic purposes as well. Last fall, she made a TikTok video asking her followers why LGBTQ representation in the media is important and how they could be better represented. She received hundreds of responses.

“A lot of the responses I got were from LGBTQ people who told me about their personal experiences or opinions,” Carter said. “A lot of them said it’s important because future generations of LGBTQ kids need to see people like them on screen to know they’re not alone and that they can go on to do great things like anyone else.”

Carter, who plans to become a psychiatrist, finds the TikTok platform fascinating.

“I’m not a very outgoing person, so I guess it’s easier for me to bring out my personality on there,” Carter said. “But when people bring it up to me in person, I do get kind of embarrassed about it, especially when my mom makes me show them to her friends!”