Randolph education professor Crystal Howell tells her students that classroom instruction—what teachers actually do with students during a lesson—is like a ladder, designed to help students climb toward the skills and knowledge their teachers want them to master.

But not every ladder works for every student. For teachers, it’s often about getting out of their own comfort zones and offering students multiple ways to reach their goals.

A new program launching at Randolph this summer will help teachers and others who work with students learn how to broaden those approaches.

The Graduate Certificate in Dyslexia (GCD) is designed to help future and current teachers think about the needs of students with dyslexia and other language-based learning disabilities and to “create more and better ladders with their needs and strengths in mind,” according to Howell. 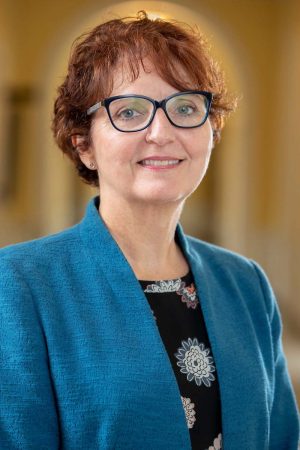 Regular education programs typically include one special education survey course and not much more. Yet every teacher, regardless of subject, encounters students with disabilities like dyslexia. Newer research recognizes that dyslexia occurs on a spectrum, added Peggy Schimmoeller, chair of Randolph’s education department.

Some students can read without any problems but struggle with writing, called dysgraphia. Others have difficulty with numbers, referred to as dyscalculia. And some students escape notice for years because they are able to compensate for any difficulties they may be having.

Schimmoeller would know. She’s lived it. Two of her children are dyslexic, diagnosed at different points in their lives—her son when he was 8, and her daughter when she was a junior in high school (she was one of those who was able to compensate).

After years spent advocating for her own children and navigating the system, Schimmoeller has plans to write a book and has been interviewing other families about their experiences.

“There’s a lot that needs to be done for this population,” she said. “The most common thing they’re told is they’re being lazy. When you see how these kids struggle but how bright
they are, things shouldn’t be that hard for them.”

Both she and Howell said they’ve heard from local administrators and teachers about a need for additional resources in this area.

The GCD will be taught entirely online, launching this summer with one course—Tests and Measurement—followed by two more in the fall. It’s designed to be completed in three to five semesters. And while the primary target is practicing teachers, Schimmoeller said it also would be useful for anyone who works with children or even parents who want to learn how to be better advocates for their own kids.

It will be a research-based program, culminating with a project where those taking the course work with and study a student who has dyslexia—“kind of like a case study,” Schimmoeller said.

The program is something Howell, who spent seven years teaching middle and high school Spanish, wishes was available when she was working toward her degrees.

“A sequence like this, frankly, would have been really helpful,” she added.