Layli Long Soldier, an award-winning poet and member of the M.F.A. faculty, shares her work during the residency program.

As an English major, Amelia Harrington ’17, ’20 M.F.A. loved her undergraduate experience at Randolph College. She excelled in poetry and creative writing, graduating with honors in the major. But what really elevated her Randolph experience were the close relationships she developed with professors. So when she learned about Randolph’s new low-residency M.F.A in creative writing program, she was one of the first to sign on.

“I’m surrounded by wonderful people, and I feel like this is my place—the place that stokes my creativity,” Harrington said.

The new program exceeded enrollment expectations in its inaugural year, drawing students from all over the nation—and some of the best and brightest writers as faculty. The first residency took place this summer and included a series of public readings by nationally recognized authors as well as a keynote by Gregory Pardlo, the 2015 Pulitzer Prize-winning poet. Other presenters included M.F.A. faculty, including Kaveh Akbar, Aviya Kushner, Wayétu Moore, and Mira Jacob.

“It’s an intense program, and there was a lot to take in during the workshops and readings at the first residency,” said Jacob, an acclaimed novelist and writer. “But I think a lot of the ideas the students heard, even if they didn’t take them in or fully understand them at the time, are things they can go back to later on in their writing.”

Prior to her return to Randolph, Harrington played in a band, traveled, and taught English online. She released a book of collage/poetry called I’d Write a Book of Poems, and started a project of Laundromat Ruminations that eventually became her first workshop material for the M.F.A. residency.

“I signed up because I love Randolph and feel a sense of home here,” she said. “From the program, I want to learn more about how to interact with people and the world.”

Joseph Van Hayes Capeheart ’20 M.F.A. is a published poet living in Brooklyn, New York. His works have appeared in numerous publications and his poetry videos were featured on Button Poetry and MTV.

“Something that was incredible about the lectures was how present the faculty was,” he said. “We could see that they were learning a lot as well. It really sold the whole collaborative writing environment.”

Evan Mallon ’20 M.F.A., a graduate of the Clarion Science Fiction and Fantasy Writer’s Workshop, was drawn to the program for the opportunity to grow as a writer—and because of its commitment to diversity and individualized education.

“It very much seems like an organization that’s actually standing behind its mission statement,” he said. “We signed up because we wanted a personalized experience and the opportunity to work with exceptional faculty, and it was proven to us during the residency that we made the right choice.” 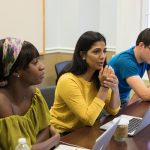 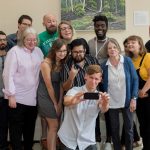 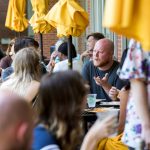