Cale Holmes ’16 during a newscast at WBOC in Maryland

On any given day, Cale Holmes ’16 could be asked to cover just about anything for his job as news producer for WBOC, a television station in Salisbury, Maryland. By nature, journalism is a fast-moving career— and Holmes loves every challenging minute.

“It’s an interesting gig, and I’ve learned a lot about myself and about journalism,” said Holmes, who got the job at the station after graduating from the Columbia University School of Journalism last summer.

For instance, after the recent hurricane in Puerto Rico, Holmes discovered and shared a government hotline that allowed people to check on relatives and friends in the territory. The story drew a positive response from viewers. “It’s great to know that even in a small town like Salisbury, Maryland, the work we do makes a difference.”

A global studies major at Randolph, Holmes was first bitten by the journalism bug while working for the Sundial on campus. “As a journalist, you experience the world in duality—in one way as a student or citizen, and secondly as a journalist.”

The Columbia master’s program was an intense, one-year program that allowed Holmes to not only hone the craft, but to experience life in New York City.

He lived in a nonprofit residential building that catered to students and young professionals from around the world, and his coursework included stories like the one on the freedom fighter Oscar Lopez-Rivera, who was imprisoned before his sentence was commuted by President Barack Obama.

Holmes also serves as a college and career counselor for a program at Wicomico County Schools for students who aren’t meeting their academic potential, and he’s made a visit back to Randolph to share his experiences since graduating. He is always happy to talk about his passion for Chinese culture, which expanded while at the College.

As a student, Holmes got the opportunity to live in Beijing for several months as part of a Chinese language program and has since visited friend who lives there, Sam Sun ’17, as well. Holmes’s language skills came in handy during his master’s program, when he did a project on Chinatown and did interviews in Mandarin Chinese.

“China is unique in its relationship to the United States,” he said. “I think it’s really misunderstood and people often have a very outdated or perhaps backward view of China.

“That’s driven me to want to immerse myself and hopefully be an agent of intercultural understanding and intercultural relations for the better,” he added. “One thing I took away from studying abroad in China is that I think people who travel have a responsibility to build bridges between people here and people there. That’s what I’ve tried to do in some capacity.” 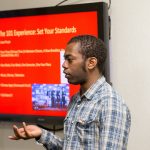 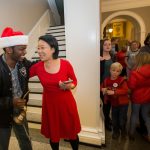 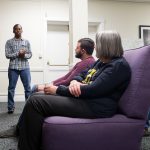