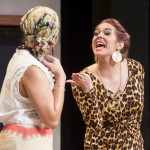 Randolph College’s WildCat Theatre will present Vanya and Sonia and Masha and Spike (VSMS), written by master of comedy Christopher Durang, Thursday through Sunday at 7:30 p.m. The production, directed by Melora Kordos, a local professional actor and director, will be held in Thoresen Theatre. Admission is $10 general, $8 senior/faculty and staff, and $5... READ MORE >>