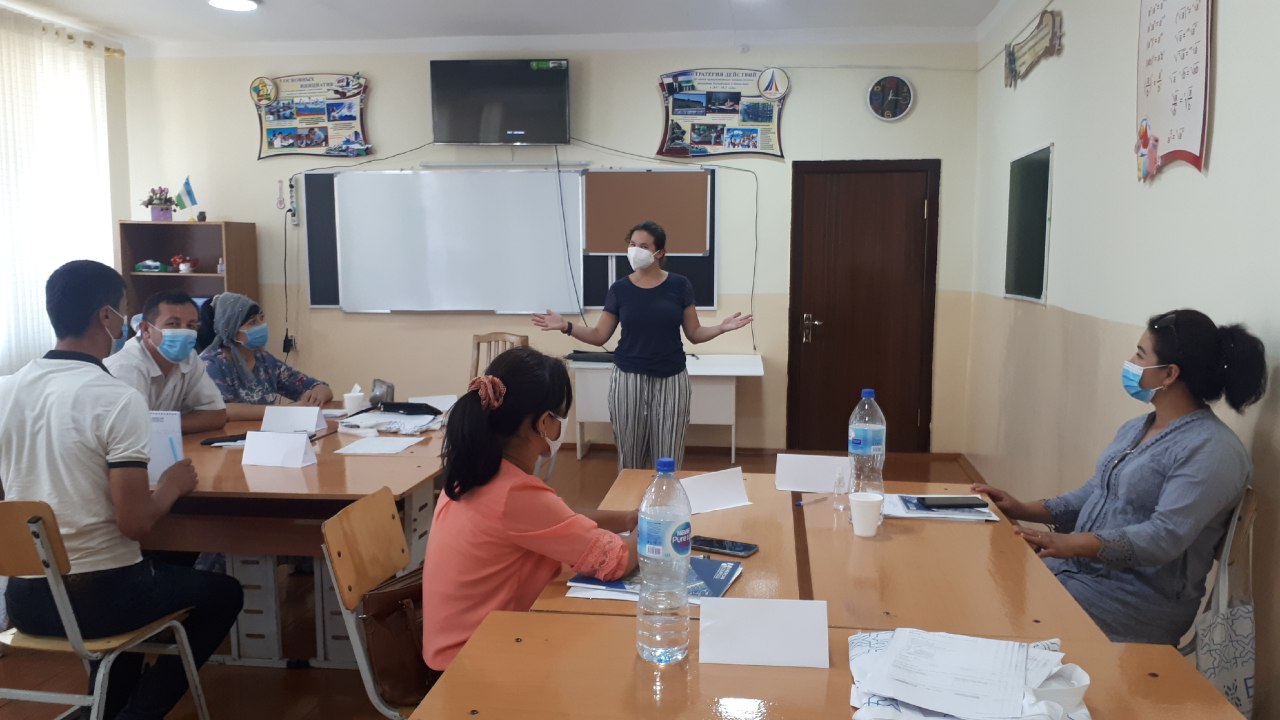 Gaddis taught in Uzbekistan last summer through a program of the nonprofit American Councils for International Education. 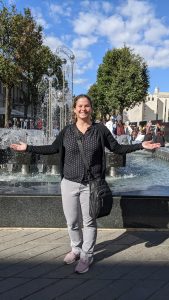 She is currently in Lithuania as a U.S. State Department English Language Fellow.

Heather Godfrey Gaddis ’06 has traveled from Mexico to Turkey and back again, teaching English to foreign language speakers.

“I’ve rolled into places in Mexico where my students didn’t have desks,” she said. “I’ve been told, ‘You were going to have 20 students, now you have 40, and we don’t have electricity. Deal with it.’”

Her love for language has helped her tackle such challenges head on.

“I was always really interested in linguistics, and applied linguistics is one of the main ways to use it, to get into English language teaching,” she said. “It also allowed me to go abroad. You can teach English anywhere.”

For her latest adventure, Gaddis is overseas once again. She’s currently in Lithuania in the midst of a prestigious 10-month fellowship with the U.S. State Department, training teachers and teaching English at Vytautas Magnus University (VDU).

Since September, she has been leading courses related to teaching methodology and the integration of technology to pre-service instructors at the university’s Academy of Education in Vilnius, the capital of Lithuania.

Fellows also pursue secondary projects that address needs in the communities in which they serve. Gaddis has been volunteering at VDU’s Ukrainian Center, organizing English speaking clubs for Ukrainian refugees in Vilnius.

The English Language Fellow Program is one of several offered by the State Department.

Gaddis has also participated in the English Language Specialist Program, which provides in-country and virtual appointments that last for three months or less and require expertise in a specific subject. She completed that program during the pandemic, part of a team that created a webinar series to help Mexican teachers transition to virtual schooling.

“We were each in charge of different topics based on our backgrounds,” she said. “I had more experience working with older children and doing online course design, so I was the leader in those. Most of our participants were from Mexico, but there were also people from other parts of the world.”

Before she left for Lithuania, Gaddis completed another virtual fellowship, working with pre-service and in-service teachers in Sri Lanka, through the State Department and also provided some programming for its Access Program, a scholarship the United States government awards to 12- to 17-year-olds from low-resource areas to study English for free.

Her interest in languages can be traced back to high school Latin classes and summers working at a Mexican restaurant, where she learned Spanish.

Gaddis majored in international relations and religion at the College and also took classes in Russian. During her time here, she was the recipient of a Gottwald Scholarship, which she used to fund two trips to Mexico to take an intensive Spanish language course and earn an English language teaching certificate.

“It’s directly related to what I do now. The freedom of that scholarship was pretty amazing,” said Gaddis, who went on to earn her master’s in applied linguistics at Old Dominion University.

She began teaching after graduation, first at an intensive English program in the United States, then later at a university in Mexico and a college in Turkey, where she developed an interest in educational technology.

She also spent seven and a half years working as the academic coordinator for a K-12 girls’ school in Mexico before becoming a full-time freelancer in 2018. That work finds her conducting teacher training and giving English proficiency exams for her clients.

Last summer, she taught in Uzbekistan through a program of the nonprofit American Councils for International Education for teachers with a low level of English.

The project brought things full circle, in a way, requiring Gaddis to pull from her previous travels.

“There, language was more of an issue because I was in a small city,” she said. “I used a little bit of Turkish I still remember, a little bit of French, and the Russian I remembered. I used all of the languages I knew, and probably some I didn’t, in order to communicate.”