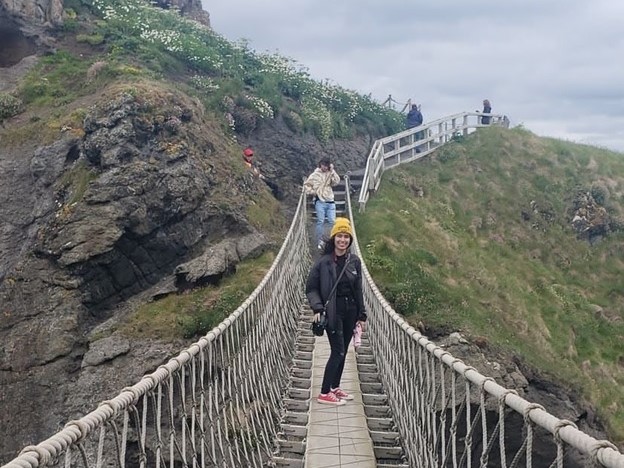 Kylie Edington ’23 at the Carrick-a-Rede Rope Bridge in Northern Ireland.

Kylie Edington ’23 likes to joke that she chose Randolph because it looks like Hogwarts.

So when the opportunity to study abroad at Queens University in Belfast—which also bears more than a passing resemblance to the fictional school featured in the Harry Potter books—Edington jumped at the chance.

“That’s what I look for in a school, I guess,” she said with a laugh.

Edington, who is double majoring in history and classics, recently spent six months in Belfast, arriving in January and returning to the United States in mid-June.

The Queens University Belfast program is one of nine destinations, across four continents, offered to Randolph students for semester- and year-long study. Six locations were recently added—Greece, France, Costa Rica, Thailand, China, and Morocco—joining programs already offered in the U.K., Japan, and Spain.

During Edington’s time in Belfast, she took two history courses, bonded with students who have became some of her closest friends, and explored more of the world.

She went on affordable excursions to Northern Ireland sites such as the Carrick-a-Rede Rope Bridge, which is suspended over a 30-meter deep and 20-meter wide chasm, and Giant’s Causeway, a collection of 40,000 closely packed basalt pillars jutting out from the coastline.

Edington loved meeting the locals and hearing their stories, while admiring the political murals that document the city’s history of conflicts and political divisions.

“The city itself feels very safe now,” she said. “They don’t try to hide their history and are very open about what happened during the Troubles, no matter what side they were on.”

Edington would eventually like to become a history professor. She’s already applied for a master’s program at Queens University, where she’d also like to earn her Ph.D., both in European history.