SciFest keynote to focus on ‘Life Lessons from Curious Adventures’ 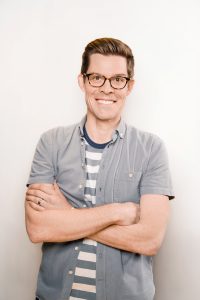 Joe Hanson has been telling stories about science for more than a decade.

“It actually started when I was still in graduate school, identifying a gap between the work I was doing as a scientist personally and what people understood about its importance and value to society,” said Hanson, who will give the Randolph College Science Festival keynote on Thursday. “And just the interesting-ness of the process of discovery. All those things that are sort of why we do what we do.”

Hanson’s first foray into storytelling was with his own Tumblr blog, which eventually caught the eye of executives at PBS at a time when they were looking to reach new audiences with online content.

“It was a huge opportunity to reach people who had sort of turned away from traditional sources, like science magazines and newspaper sections,” he said. “I was able to build an audience of curious millennials, and PBS reached out to me. We worked together to adapt what I was doing for the video format.”

The result, PBS Digital Studios’ It’s Okay To Be Smart, debuted in 2013 and has amassed 4.5 million subscribers and more than 420 million views. It also earned Hanson, who has a Ph.D. in cell and molecular biology, the 2017 Webby Award for Best Web Personality.

From there, he layers on humor, music, eye-catching graphics, and pop culture references, covering topics ranging from why sand dunes exist to what’s possible in evolution to the science of cheese.

His work has attracted audiences from all over the world, and of all ages.

“I like to think of constructing these stories like an onion so you can continue to experience a different layer perhaps the farther you get into the video. Or the next time you watch it, you might get into a new layer of complexity,” Hanson said. “The really fun challenge is trying to do something for a really broad and diverse group of people. It makes me think about stories differently.”

Hanson’s SciFest keynote, “Life Lessons from Curious Adventures,” will be held Thursday at 7:30 p.m. in Wimberly Recital Hall. It is free and open to the public.

Through sharing his own journey, he sets out to provide a toolkit to navigate our increasingly complex world using science, what he calls “the best tool we know.”

“They’re literal lessons about life that I think we can put in our pocket and use not just for what they tell us about science, but how to view the world and get a better idea of reality.”

Hanson’s parents always fostered his curiosity, encouraging him to not just ask questions but also how to answer them.

“When you do that, you are led to science, because that’s the way we uncover new knowledge,” he said. “It’s the natural way a child navigates the world, looking for answers and testing things, seeing what’s true and what isn’t, using that knowledge for the next question.