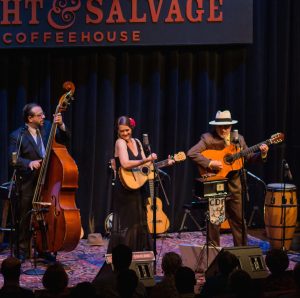 The band, which will perform Saturday, April 9 at 7:30 p.m., takes inspiration from the troubadours of Mexico and Latin America, combining voice, strings, and percussion with “explosive foot-stomping called zapateado.”

“Their performances combine dance, storytelling, and music in a way that is extremely dynamic while remaining engaging and accessible,” said Emily Yap Chua, music professor and director of the Guest Artist Series. “The ensemble’s mission is to share the musical heritage of Mexico and Latin America, and this concert is a wonderful opportunity for our community to broaden their understanding of world cultures and performance traditions.”