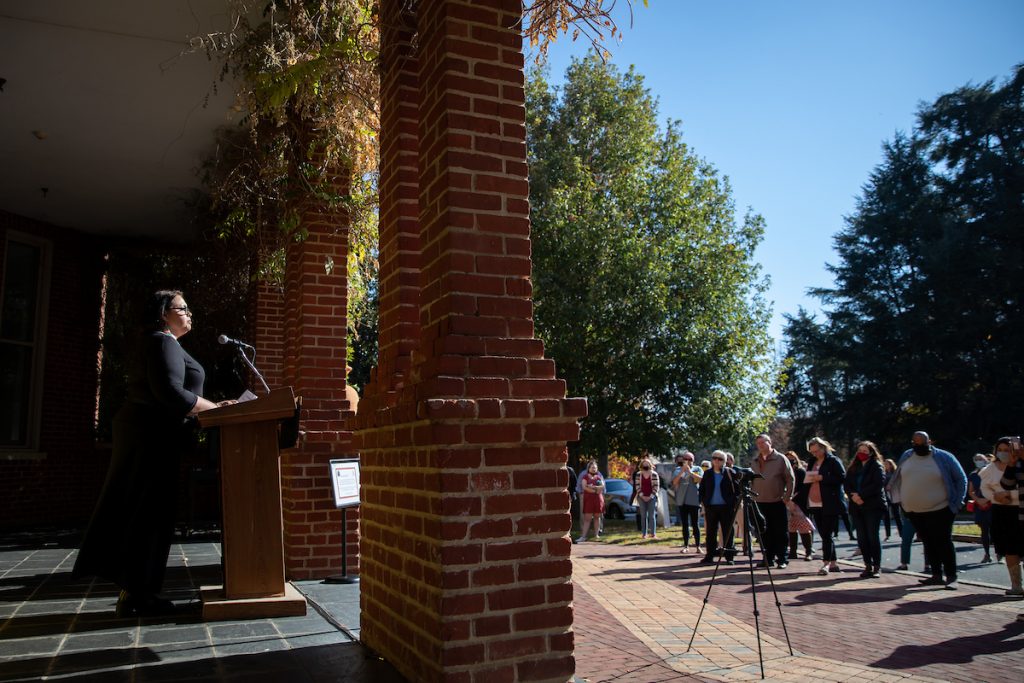 Lou Branham, of the Monacan Indian Nation, speaks during the land acknowledgement ceremony on Thursday.

Randolph College honored a key part of its history Thursday during a land acknowledgement ceremony with the Monacan Indian Nation.

“The lands we walk upon belong to native people,” Josh Bulavko ’22 said during the event. “Today, Randolph College is doing the right thing in acknowledging that this is Monacan land. We must honor and respect the truth of that past.”

The College sits on traditional lands of the Monacans, who are now based in Amherst County. In the 1600s, the Monacan people lived in communities spanning the New River to the Fall Line at Richmond. They hunted deer and elk, farmed the land, and traded with the Powhatans to the east and Iroquois to the north.

They lived by the ethos that the land is the people, and the people are the land, said Lou Branham, a former Monacan assistant chief who now runs the Monacan Indian Nation Ancestral Museum.

When English settlers began arriving, the Monacans didn’t appear to want any contact with them, according to the museum, and gradually moved westward.

Soon, they were reduced to a fraction of their original numbers. But they’ve survived—officially receiving federal recognition in 2018—and now work to assist tribal members and educate the general public. In February, the Monacan Indian Nation cut the ribbon on a brand new community center.

“We are not relics,” Branham said during Thursday’s ceremony at Randolph. “We are descendants of the original people of this land, and we are still here today.”

Telling their story has become deeply personal to Josh Bulavko ’22, Tomi-Lauren McGinnis ’23, and history professor Gerry Sherayko, who worked together, along with the College’s Office of Diversity, Identity, Culture and Inclusion, to make Thursday’s event a reality. 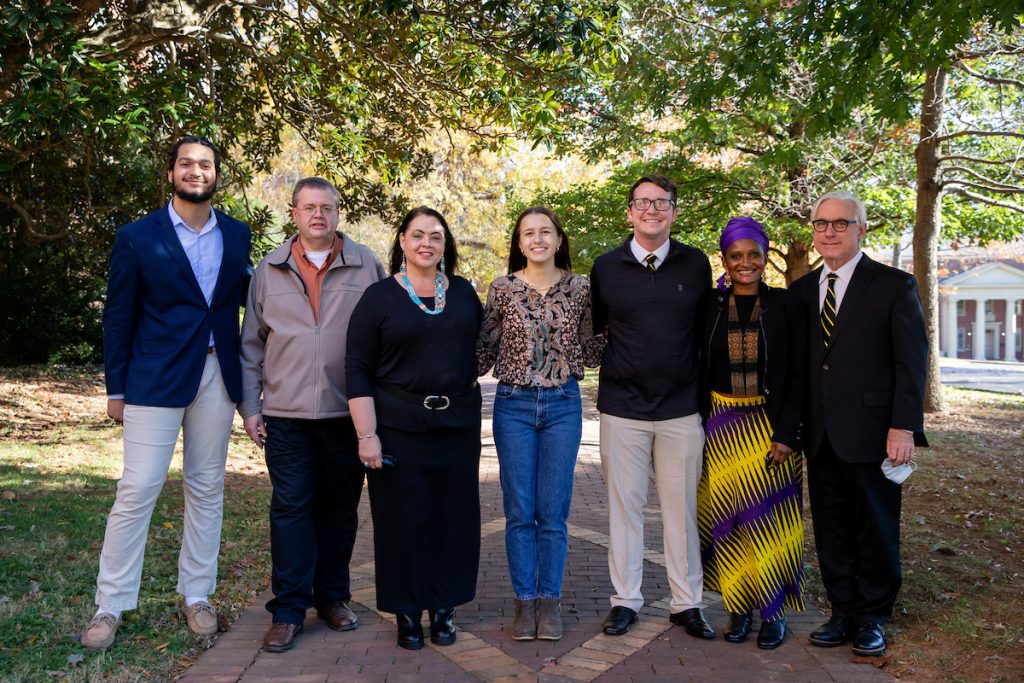 Bulavko and Sherayko began discussing the land acknowledgement in 2020, after Bulavko participated in, and was profoundly affected by, the College’s 2019 American Culture Program, “The Struggle for Native Lands in the American West.”

McGinnis eventually got involved and, this fall, has worked on the acknowledgement as part of an internship she’s doing with Sherayko, researching major turning points in the history of the College and the land on which it stands.

They want to place signs around campus—McGinnis has proposed 15 of them so far—highlighting that history, starting with the Monacan land acknowledgement. A temporary sign, on display Thursday, will eventually be replaced with a permanent plaque.

Keesha Burke-Henderson, Randolph’s chief diversity officer, said the discussion goes beyond just the land acknowledgement, which was written by McGinnis. It’s about the Monacan Indian Nation—connecting with its members and finding ways to forge a relationship with them.

McGinnis said the process, which included a trip with Sherayko to the Ancestral Museum, has been a transformative experience. The museum, she said, “is such a lovely place with a story that continues on today and needs to be heard.”

“I’m thankful the College has the diversity office, so these types of events are focused on,” she added. “We need to keep doing better as a community to bring minority voices to the forefront of our priorities.”