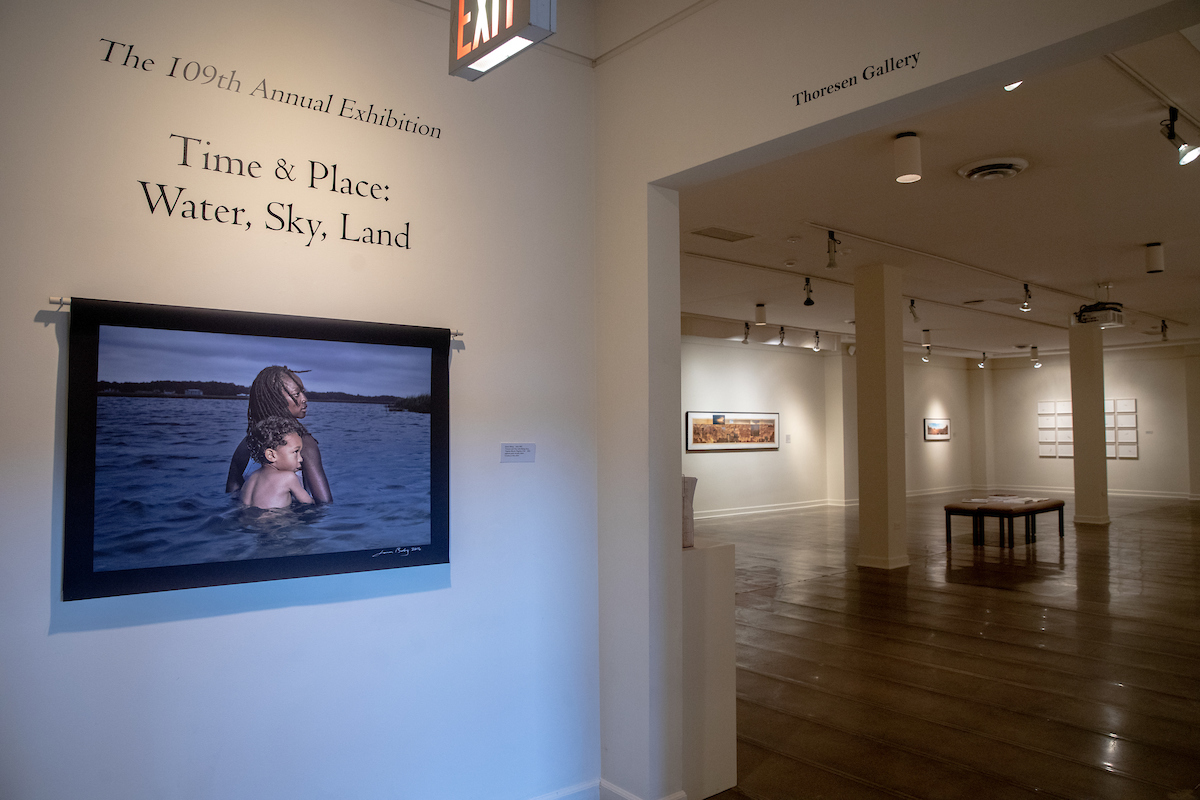 “Time & Place: Water, Sky, Land” will be on display at the Maier Museum of Art at Randolph College until April 1.

From melting glaciers in the arctic to the magic of the desert plains, Randolph College’s 109th Annual Exhibition at the Maier Museum of Art ponders the landscapes around us.

Time & Place: Water, Sky, Land—which remains up through April 1 and will be the subject of the 29th Annual Helen Clark Berlind Symposium on March 6—features work that goes beyond the boundaries of traditional photography.

“They construct, rather than take, an image. They question what should and shouldn’t be photographed. They explore,” said Tucker, curator emerita for the Museum of Fine Arts in Houston. “This is mature art that has developed over time. They’ve had decades to think about these subjects.”

The artists featured in the exhibition are not only making art, but gathering data that can be used in other disciplines. They’ve collaborated with scientists, historians, environmentalists, and poets.

That element was an important piece for Tucker and Maier Director Martha Johnson. They wanted to find ways for students studying disciplines other than art to interact with the work and, in some cases, the artists.

“They’re pushing aesthetic boundaries but also engaged in contemporary issues that could offer different perspectives and bring other disciplines to the College,” Tucker said.

Balog’s photographs documenting climate change have featured everything from melting glaciers to forest fires to major pollution in the Gulf. One such image, of a man holding a fishing net covered in oil, is included in the Maier exhibit. 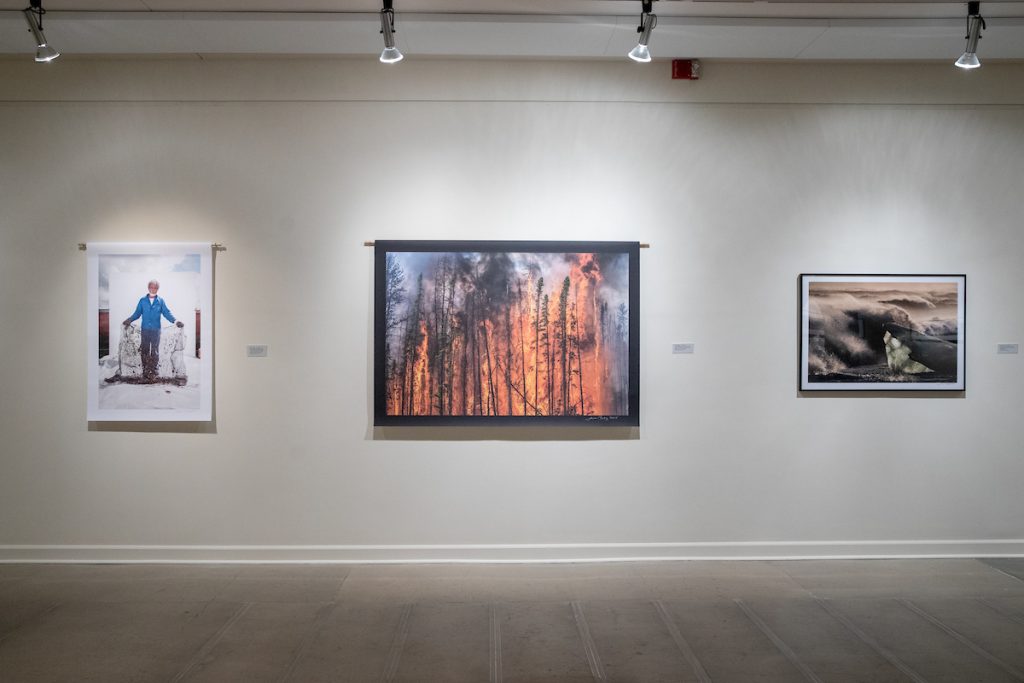 Work by artist James Balog on display at the Maier.

In 2007, he founded the Extreme Ice Survey, a long-term project dedicated to unearthing visual evidence of the human impact on water, air, forests, and wildlife.

Balog installed cameras, set to take a photograph every half hour or hour during the daytime, on more than a dozen glaciers around the world. He kept them in place for a decade. The resulting images—more than a million of them—and subsequent time-lapse films show the glaciers slowly disappearing.

Closer to home, he’s extensively interviewed and photographed people who live along the coast of Virginia, where sea levels are rapidly rising.

“Jim does the research and absorbs the information, and he works with scientists, as they all do,” Tucker said. “But then he constructs a picture that impacts us emotionally. It’s no longer just a statistic.”

Both Klett and Evans use composites and photomontage to touch on those emotions while also illustrating the passage of time.

Mark Klett’s “Details from the view at Point Sublime on the north rim of the Grand Canyon, based on the panoramic drawing by William Holmes” (1882)

Klett, who worked as a geologist before turning to photography, incorporates historic photographs taken by 19th century American surveyors into new works.

“Mark is thinking about how to portray the history of a site, like the Grand Canyon, in a photograph,” Tucker said. “He and three photographers got a National Endowment grant to go to famous sites where 19th century pictures were made. They’d stand in the exact place where that photographer stood, if it still existed, so they could compare what had happened over 100 years in that space.”

Evans’s work has focused largely on the American prairie, inspired by her upbringing in Kansas. She combines both aerial and ground photography to delve into the intricate and complex relationships between land and people. 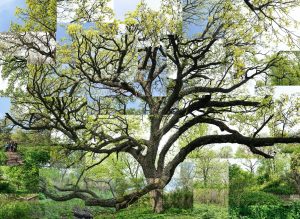 Photomontages on display at the Maier include a 300-year-old oak tree in Chicago and a view of the night sky compiled from images taken at various times, from dusk to dawn.

Blumenfeld creates work, which touches on art, science, nature, and culture, across a variety of media, including sculpture, video installation, and painting. She often works in collaboration with scientists and research institutions such as NASA, the Scripps Institution of Oceanography, and the South African National Antarctic Program.

In 2015, she won a grant to pursue a project creating a 3D virtual library of NASA’s astromaterials collections, which has continued to influence her work.

“She got really interested in meteorites,” Tucker said. “Her part of the show includes these beautiful drawings based on photographs that were taken at night of various arcs of a meteorite coming past Earth.” 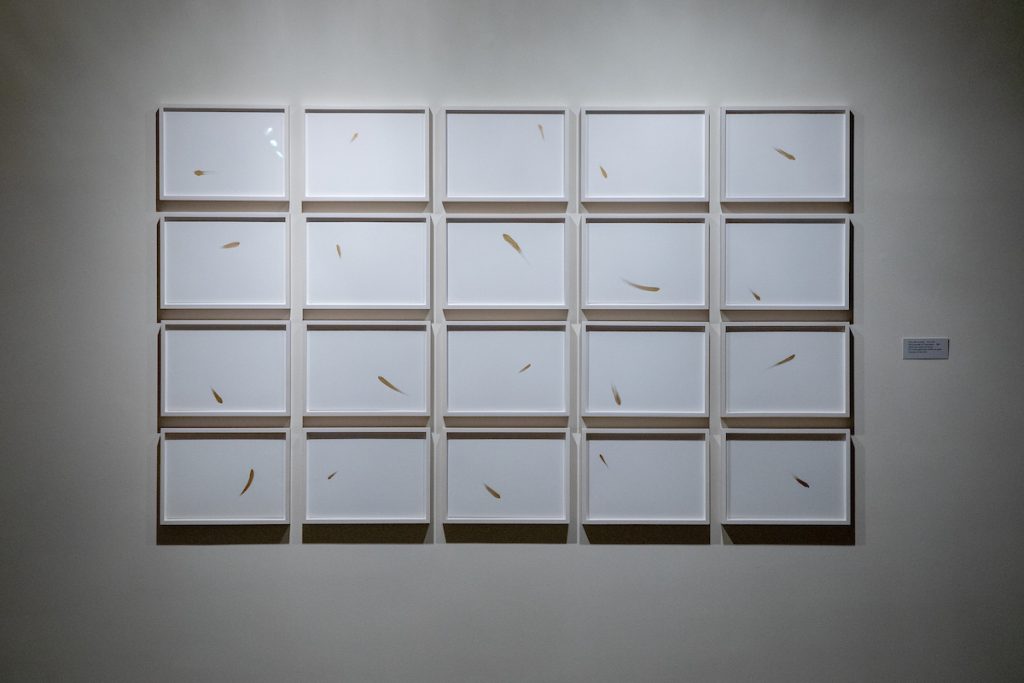 “Encyclopedia of Trajectories,” by Erika Blumenfeld

All four artists are looking at our world, whether it’s Blumenfeld to the sky or Klett to the desert.

***
Terry Evans and Mark Klett will both give artist’s talks during the virtual Helen Clark Berlind Symposium, which runs from 2 to 3:30 p.m. Saturday, March 6. A panel discussion and Q&A, moderated by Tucker, will follow.

For details about the symposium, visit http://maiermuseum.org/the-29th-annual-helen-clark-berlind-symposium-virtual-event. More information about the exhibition can be found here.