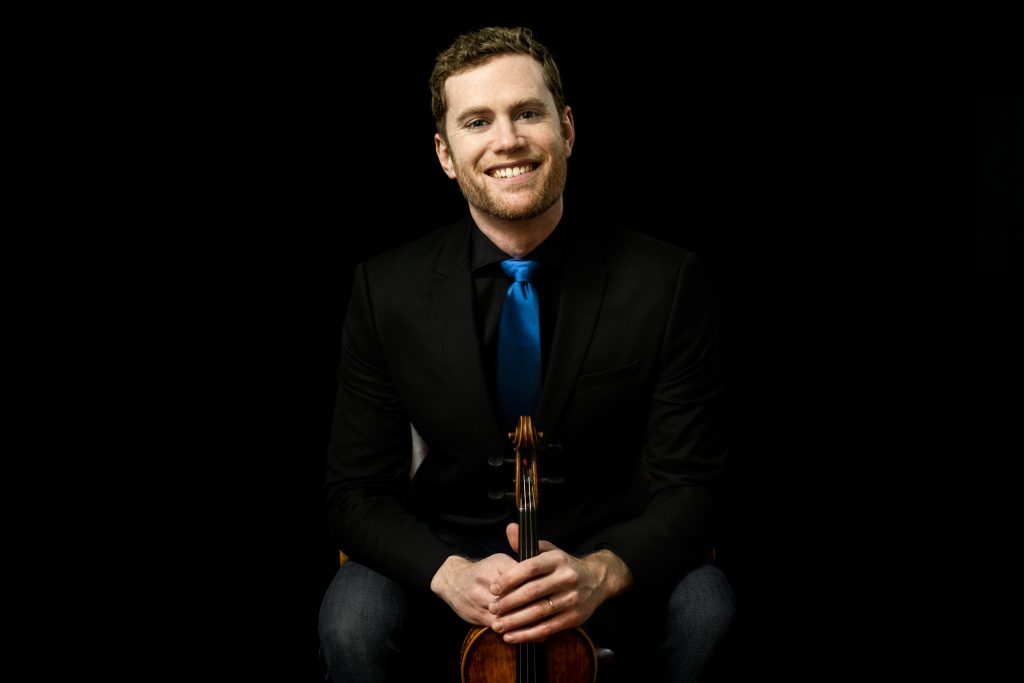 Fiddler Andrew Finn Magill can’t quite put his finger on what first interested him in the instrument. He just knows he loves it.

“Sometimes you just click with something on a visceral level, and that’s how Irish music and the fiddle was for me,” said Magill, who will perform virtually later this month as part of his guest artist residency at Randolph College.

Over the years, Magill has made a name for himself performing the fiddle across genres, from bluegrass and Appalachian to American jazz and Brazilian choro music.

He was a two-time finalist in the All-Ireland fiddle competition by the age of 16 and, in 2016, was named a rising star by NPR.

Emily Yap Chua, chair of the Randolph music department, first encountered Magill in 2019, when she served on a judging panel for the North Carolina Arts Council’s Artist Fellowship. Magill was among the recipients ultimately chosen.

“He writes beautiful, really compelling, engaging music,” Chua said. “Part of the emphasis for that fellowship was the idea of being able to further someone’s career and their intent. It was really clear this had been a consistent interest throughout his musical career, even though he is so young.”

For his guest artist residency, Magill will perform virtually on March 19 (which can be accessed here), followed by a live Q&A with viewers. He’s also put together content for students in the Lynchburg City Schools strings program and will speak to the College’s B.F.A. Colloquium on March 18.

The timing of Magill’s residency coincides with the introduction of the College’s new world music course.

“I’ve been thinking for a while of broadening the scope of the guest artist series,” Chua said. “For the most part, past guests have been performers of traditional western classical music only. It’s important to expose our students to a broader range of musical traditions.”

Here’s more of what Magill had to say about his life and career.

Can you talk a bit about the virtual program you’ll be bringing to Randolph?

“It’s based on the residency proposal I pitched to Emily, ‘The Violin as a Form of Cultural Translation.’ This idea has been one of my guiding principles my whole musical life, and so the show ends up being unavoidably quite autobiographical. Whatever music I’ve learned in my life, I’ve adapted it to the violin, be it R&B, Ghanaian folk songs, or Brazilian choro. The challenge has been to adapt these genres, which are often ‘violin-less’ to the violin. I can say what I want to say best through this instrument, far better than in the English language, so it’s a challenge I’ve never minded.

“To that point, the program spans Brazil to Appalachia to France to Ireland and other places. These are all places I’ve lived or at least spent extended parts of my life. I never really feel comfortable performing genres in which I know nothing about their cultures of origin. Everything I’ve picked for this program is representative of a little part of my life and what I’ve learned along the way.”

How about the content you’ve created for local grade school students?

“This was a real challenge because it was all virtual! I ended up picking a pop song they will hopefully know and focusing the content all on improvisation. I think it’s important for kids to feel empowered by their imaginations, and learning about how to practice improvisation is a great way to do that.”

Later this spring, you’ll be talking to Randolph’s BFA Colloquium about creating art during a pandemic. How have you adapted and navigated since it started?

“I’ve heard from more than one musician that when it comes to a successful music career, it’s less about the individual projects you’re involved with and more about the artistic mission. Projects and collaborators may come and go, but if you have clear guiding principles, there will always be work for you. For me, a guiding principle has always been to use my music to build an ever-growing community. When I was on the road that meant participating, and sometimes organizing, jam sessions after the show, and teaching lessons while on the road to people who asked.

“During COVID-19, that has meant really building the music education part of my business, organizing group lessons, leading virtual sessions of Irish music, conducting a public interview series on social media with world-renowned violinists for my YouTube channel, and offering discounted lessons.”

How do you make those connections with an audience when you’re performing virtually?

“To be honest, the connections just aren’t quite the same, and for that reason I have largely avoided performing virtually. This residency at Randolph was different from the outset however, because it’s so community-involved, with the outreach videos for string students and the Q&A, which will be integrated into the performance. We may be behind our screens, but Emily Yap Chua has created an ethos to this residency which is so participatory and Lynchburg-centric.”

You’ve said in the past that being a composer is like being an inventor. How so?

“When I compose, I am constantly experimenting with ideas and seeing what works musically. Through repeated trial and error, I eventually hit that ‘eureka’ moment where it just musically makes sense in a way I had never thought of before. To me that’s a form of invention. The rush I feel when I compose something that excites me, I have to imagine that’s what any inventor feels when they finally create that ‘something’ they’ve spent so many hours trying to create. Another similarity to invention is how many hours are needed to arrive at that ‘eureka moment.’ I spend way more time tossing out ideas that don’t work than writing down the ideas that do work. It’s that process, however grueling at times, that I actually enjoy.”