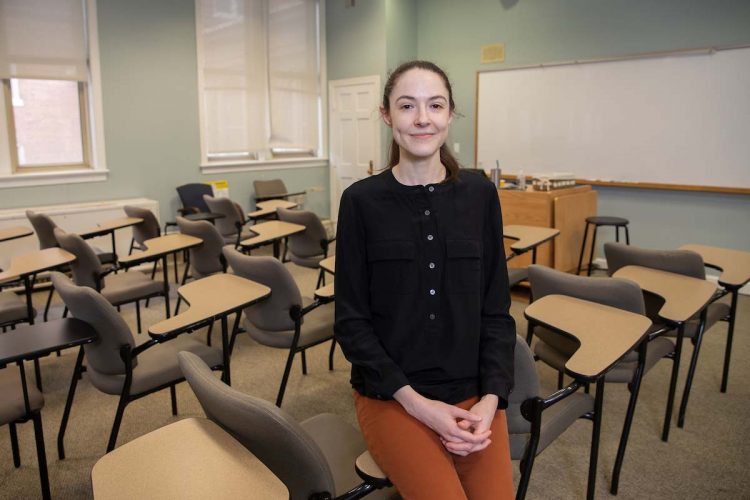 Colleen Bowen ’20 M.A.T. was announced the winner of the Association of Educators in Virginia Teacher Research Award in March for a research project she conducted that examined how historical images can help high school students learn to think like historians.

As she embarks on her career as a social studies teacher, Colleen Bowen ’20 M.A.T. is training her focus on the past and how it can help students in modern classrooms.

In March, Bowen, who is a teacher for Lynchburg City Schools, was named the winner of the Association of Educators in Virginia Teacher Research Award. The recognition was for a research project she conducted while a student teacher that examined how historical images can help high school students learn to think like historians.

“The focus of social studies education is moving away from basic recall and fact memorization and towards skill development,” said Bowen, who studied art history at the University of Virginia and was a docent at the Maier Museum of Art at Randolph College before starting Randolph’s M.A.T. program.

In her classroom, Bowen will focus on historical thinking skills—the critical thinking skills and analysis processes used by historians and others in the social sciences to craft arguments and support them with evidence. They include things like close observation, examining perspective (called sourcing), supporting and corroborating conclusions with evidence and prior knowledge, asking questions, and making inferences.

One way to do that is to teach students how to interpret historical images, which not only helps develop their historical thinking skills but also their visual literacy, which Bowen called “an essential component of communication in our society.”

“Once I decided to become a social studies teacher, I knew I wanted to incorporate visual and material culture into my instruction as much as possible,” she said. “There are so many digital archives online that students and teachers can easily access, like the Library of Congress, but there hasn’t been much action research about using digital reproductions of primary source images in secondary social studies education.”

So Bowen, who started a full-time teaching position at Heritage High School in Lynchburg in March, set out to do the research herself during a student teaching placement—a project education professor Crystal Howell said “expertly and interestingly” combined her backgrounds in art history and museum work.

Bowen taught her students two visual strategies to use when analyzing historical images, which can include primary source paintings, illustrations, and other forms of visual and material culture. One strategy tasked them with imagining what would have to be added to the image if it was enlarged, to “think about what the artist might have left out of the image,” Bowen explained. “Then, they think about where the image was initially displayed and how its original location might have impacted how it was interpreted.”

The second technique involved thinking about the creation and reception of the image through a series of questions about the artist or person who commissioned the work, as well as how the audience may have interpreted it.

“Both strategies encourage students to think about more than just the surface-level subject of an image. Instead, they are encouraged to consider the purpose behind the creation of the image, the message the artist is trying to convey, and how audiences might have perceived the image.”

In the end, Bowen found that students demonstrated more historical thinking skills after the visual analysis instruction, which she said could be used to develop instructional strategies in classrooms.

It also will leave a lasting impact on students, Howell said.

“Her students are developing critical visual literacy skills they will use long after they leave her class,” Howell said. “We live in a visually saturated world, and whether they’re engaging with historical or contemporary images, Ms. Bowen’s students, as her research has shown, will leave her class more able to critically interpret the various visual texts they’ll encounter.”