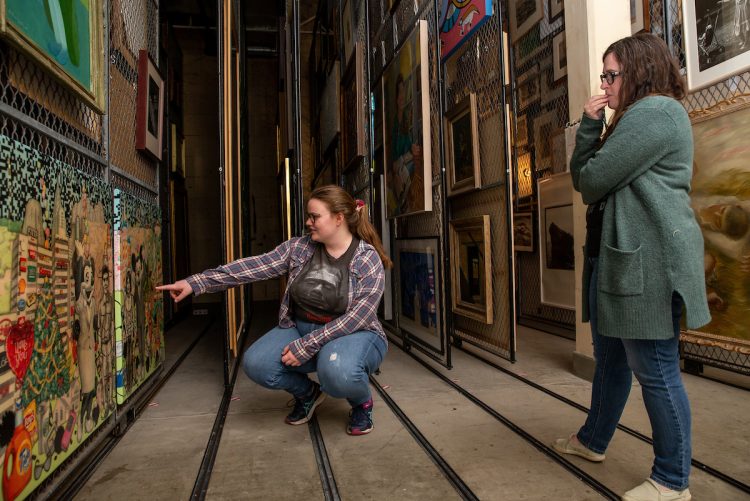 Jaisen Williams ’21 admires Sang-ah Choi’s Welcome to America, which recently was featured in From the Vault, a new social media project created for Women’s History Month.

The Maier Museum of Art at Randolph College’s vault got a workout Friday afternoon, thanks to students in an introduction to museum education class.

Students pulled the vault’s large sliding racks, which span from the floor to the ceiling, back and forth, admiring work from the permanent collection.

Paintings from Amherst folk artist Queena Stovall and pioneering abstract painter Helen Frankenthaler got particular attention as the students discussed From the Vault, a new social media project created to observe Women’s History Month and the 100th anniversary of the passage of the 19th Amendment.

A different female artist, whose work is in the College’s permanent collection but not currently on view, is being featured on Facebook and Instagram every day in March, using the hashtag #fromthemaiervault.

The write-ups have been compiled by students enrolled in the museum education class, as well as a gender, feminism and art history course taught by art history professor Lesley Shipley.

“We really work to have real world experiences as much as possible,” said Laura McManus, the Maier’s curator of education, who teaches the museum education course. “I just feel it’s through the doing that you learn.”

In this instance, it’s learning not only how to write about works of art, but also to use social media in museum work, said history major Jaisen Williams ’21, who is minoring in museum and heritage studies and called the project a resume builder.

McManus said she and Shipley came up with a checklist of artists they wanted to include, covering a wide range of media, ages, geographic locations and cultural backgrounds.

McManus had a particular focus on seldom-seen works, she said, while Shipley made sure to include some of the artists students were studying in her class.

From there, students literally chose artists’ names out of a hat, though some negotiations eventually ensued. 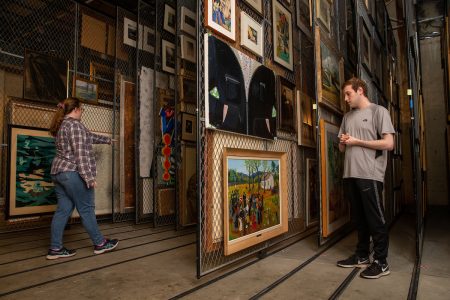 Charlie Small ’21, for instance, traded his initial draw for Stovall’s Swing Low, Sweet Chariot. He was interested in her connection to Randolph, where she enrolled in 1949 to study art. In her 60s at the time, Stovall left after one term when her teacher, artist Pierre Daura, recommended against taking more classes in order to continue developing her own style.

The painting features a neighbor’s funeral, with a mountain view in the background that Small, a history major, recognized from Randolph’s Student Center.

“One of the things I personally liked about this one [is] these are the same mountains, the same view,” he said. “That’s what attracted me.”

So far, the project has recognized Louise Jordan Smith, the College’s first art professor and founder of the collection, for being “a rule breaker and trailblazer;” Pat Passlof, who “worked to create a female presence in the male-dominated art world of the 1950s-1970s;” Carrie Mae Weems, who uses photography and video to address issues of race, gender and identity in African American history and culture; and Treacy Ziegler, a painter, sculptor and printmaker who has focused much of her career on prison outreach, developing art workshops and even a mail-based art curriculum for inmates.

It’s also highlighted Beatrice Modisett, whose work is featured in the Maier’s current exhibit, Scorched Earth, as well as Caldecott Medal-winning author and illustrator Sophie Blackall, whose Wombat six outtake was part of the fall exhibition, Children’s Book Illustrations: Visual Storytelling, and is a new acquisition for the collection.

Still to come are Stovall, Frankenthaler, photographer Sally Mann and, well, you’ve got to tune in to find out.

“We have a huge collection of women artists, which is unusual,” McManus said. “… Museums are now trying to backtrack and collect women artists. We’re in a unique position, because we have a lot.”

For students, projects like From the Vault provide insight that goes beyond traditional learning, said Emilie Bryant ’22, a museum and heritage studies major.

“It’s not just memorizing material. It’s not just reading a book and regurgitating it,” she said. “It’s really getting to know these pieces of art.”