When most people get word that bad weather is approaching, they find a safe place and take cover. Not Shawn Simmons ’16. He spent his summer looking for it.

Simmons, who is a graduate student at Purdue University studying earth, atmospheric, and planetary science, recently participated in a special storm chasing project. He and his classmates traveled across the country in a truck outfitted with Doppler radar, collecting data on raindrop size, velocity, and distribution. Simmons also launched balloons equipped with sensors used to measure wind speed and direction.

“Our job as students was to help with the balloon launches, which allowed us to understand more of what the environment looks like as you go higher into the troposphere,” Simmons said. “A lot of my other research has involved sitting at a computer and programming, working with models and stuff. It was a good experience to see what it’s like to do physical research, collect data, go into the field, and work with the devices and equipment.”

The storm chasing adventure started in Indiana and took the team all across the Midwest and the Great Plains. They witnessed plenty of hailstorms and tracked tropical storm Cindy for a time—a trek that took them from Eastern Nebraska all the way to Northern Alabama in one day. The group even visited the National Weather Service in Norman, Oklahoma, where they shared some of their data.

“It wasn’t like we were sitting somewhere and waiting for the weather to come to us,” Simmons said. “We weren’t sure what was going to happen each day, so we just went where the weather was.”

This fall, Simmons shared his experiences with Randolph students. He served as a guest lecturer for the Atmospheric Phenomena and Climate Dynamics courses, both taught by Karin Warren, the Herzog Family Professor of Environmental Studies. Coincidentally, the Atmospheric Phenomena first-year seminar is the same class in which Simmons decided to minor in environmental studies.

“It’s thrilling to have Shawn come back and teach my students,” Warren said. “I love hearing about his meteorology work and where it’s taking him. He’s on the cutting edge of what’s happening. I love for our students here to see that you can come in as a first-year and you never know where inspiration is going to come from.” 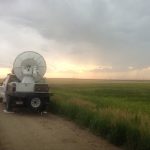 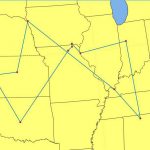