‘They Make the World a Better Place’

Leslie Jones ’93 shares her passion for animals through veterinary medicine When it comes to animals, Leslie Jones ’93 has seen it all. In her role as a veterinarian, she has chased a cow as she jumped over a stone wall while giving birth, spayed and neutered street dogs and cats in Belize for the World Vets organization, and administered acupuncture treatment to a dog that couldn’t stand—later watching it walk out of the room.

“I truly love working with all animals and getting to know them,” Jones said. “They make the world a better place.”

Jones is the owner of Woodlake Animal Hospital in Midlothian, Virginia, and has been a small animal practitioner for 13 years. She specializes in integrative medicine, which incorporates both Eastern and Western veterinary medicine. Along with getting to know the animals, Jones also enjoys making friends with their human owners. However, one of the most difficult parts of her job is defending her recommendations against “Dr. Google” and workers at big box pet stores.

“Increasingly, I feel that our profession is getting disrespected and devalued, and all I truly want to do is help people and their pets have the best possible—and longest possible—time together,” she said. “This happens more and more. However, fortunately I have more of the people and pets with whom I have a great relationship and not as many of the other.”

Though working with animals has always been her dream, Jones’s life wasn’t always headed in that direction. An international relations and business major at the College, Jones started her career working for two accounting firms—first in San Francisco and then New York City—while applying to business and law schools.

Jones quickly decided life as a businesswoman wasn’t for her, and she turned her attention to becoming a veterinarian. She moved back home to Long Island, N.Y., where she went on to earn a B.S. degree in marine biology from LIU-Southampton College in 1995. She later went to the University College in Dublin, Ireland, where she earned her veterinary medicine degree.

“Being a doctor of veterinary medicine is really all I ever had a true passion for,” Jones said.

In April, Jones spoke at Randolph’s annual Science Festival and urged students to keep an open mind about their career paths. Even though she majored in a completely different field, Jones said the College prepared her well for everything that came her way.

“R-MWC instilled in me the strength and foresight to handle whatever comes next,” she said. “I enjoy being able to bring people from all walks of life together and helping them find common ground and orchestrating making that project move forward. I was involved with a number of organizations within R-MWC, and those skills have helped me both personally and professionally throughout my life.” 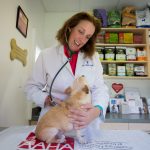 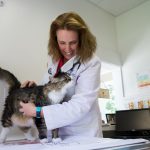