‘The Show’ returns: Faculty, staff to perform for students in talent(less) show, held once every four years 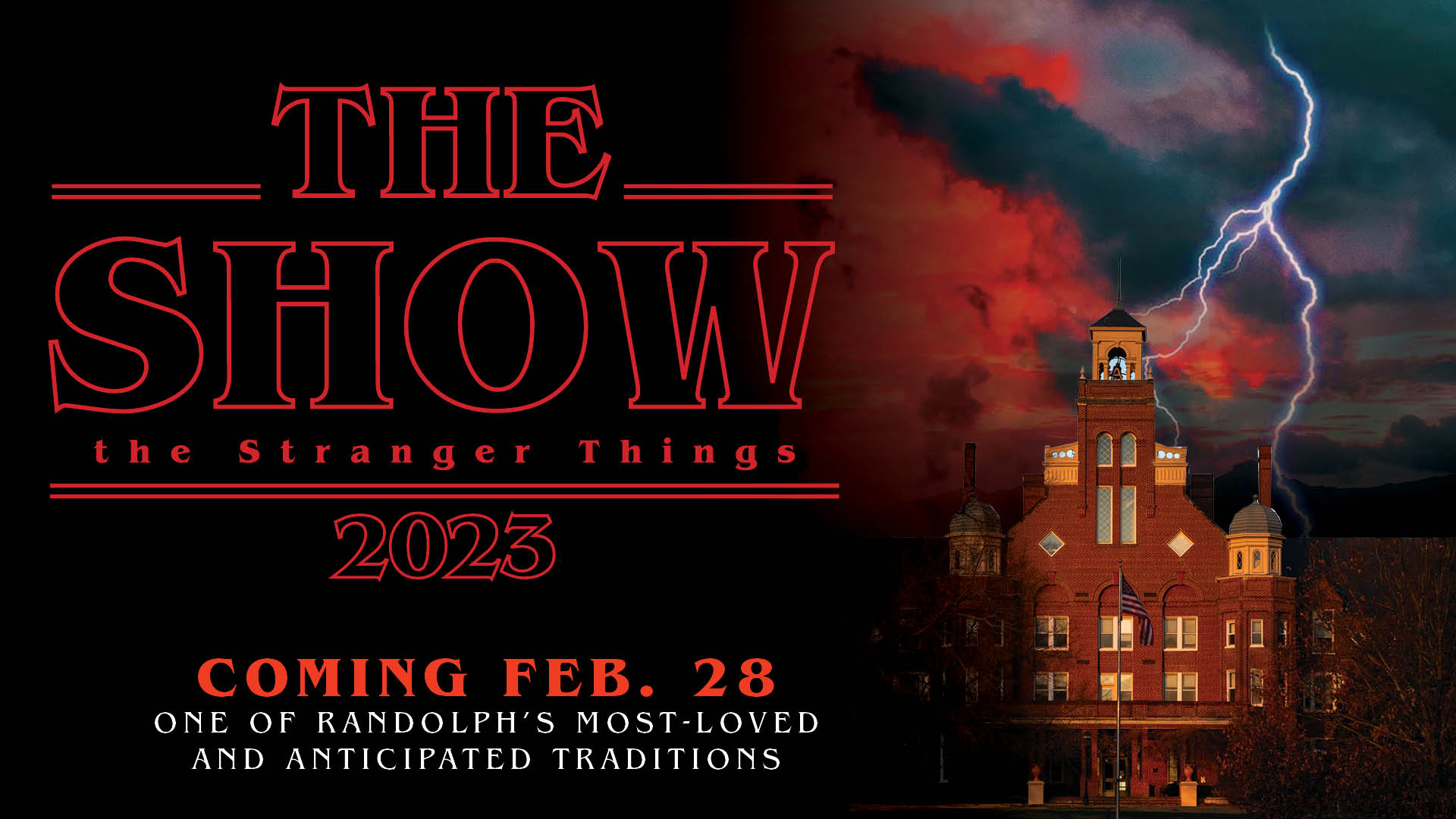 Things are about to get strange. Very strange.

One of the College’s most outrageous events, The Show, is returning on Feb. 28.

The talent—some (most) might say talentless—show features performances by Randolph faculty and staff designed to provide a night of fun for students. It’s a chance for them to let their hair down (or put it up) and showcase their skills and talents (or lack thereof).

It is arguably one of the most loved, most anticipated traditions—and it only happens once every four years.

The theme for 2023 is Stranger Things, inspired by the Netflix series. It will feature more than 20 acts and about 80 performers.

“One night every four years, the faculty and staff of Randolph College come together to embarrass ourselves for the joy of the students, proving how entertaining it can be to witness full passion mixed with very little talent,” said Gary Dop, Randolph’s dean of graduate studies and innovation. He will host the event with theatre professor Stephanie Earl.

“We can promise the students that The Show is the most important educational experience of their lives,” he added. “They will see how some of the most intelligent, talented, and capable humans do in areas in which they have very little talent, intelligence, or capability.”

Performers have been known to impersonate popular musicians or evoke pop culture touchstones. There have been kazoo choruses, Shakespearean parodies, magic demonstrations, and punk rock performances.

You never know what you’ll see at The Show. (It’s one of the reasons we only do it once every four years. We kind of hope you’ll forget it.)

The tradition dates back to 1915, when faculty and staff staged a performance to raise money to build what is now Smith Hall. Then called the Alumnae-Faculty Classical Vaudeville, acts included a fashion show (participants dressed as ancient Greeks), a comedy, and a Grecian dance. It’s been called several names over the years, including The Faculty Follies.

Occasional performances followed—in 1917, it took on the form of a “faculty circus,” with professors posing as trained animals—before it became a midwinter tradition, held every four years, beginning in 1948.

Students only get one chance to see The Show while they are in school, although many alumnae and alumni also return to once again see their professors in a whole new light. Or, as the historian of the Class of 1936 put it while writing about the tradition, experience “the joy of seeing our teachers minus their dignity, the surprise at seeing their enjoyment and cleverness.”

And there’s no telling when a new legend or tradition-within-a-tradition might be born. For instance, back in 1956, then-President Bill Quillian performed a Cab Calloway song, Minnie the Moocher, to conclude that year’s show. This would go on to become a yearly tradition that stretched beyond his 1978 retirement and well into the 2000s.

A more modern equivalent is an ongoing faculty and staff performance of I’m A Little Teapot, complete with teapot-shaped sandwich boards and the occasional tin foil hat. This act began somewhere around 2003.

Recent themes for The Show have taken inspiration from the 2017 movie The Greatest Showman and the FX series American Horror Story.

The curtain opens at 7:30 p.m. Tuesday, Feb. 28, in Smith Hall Theatre. Tickets are $2 in advance and can be purchased outside the dining hall in the weeks leading up to the performance, and $3 at the door. T-shirts are $9, and a T-shirt/ticket combo is $10.