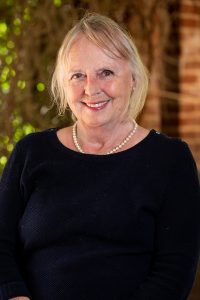 This story is part of a series featuring faculty members who are retiring in 2021.

French professor Francoise Watts always makes a point to emphasize the importance of meaningful communication in her courses.

“I always tell students that learning a foreign language means reaching out to the other, telling someone who is different from you that you have an interest in him/her, and in turn he/she will be interested in you,” said Watts, who first came to Randolph in 1987.

“There should be an exchange, communication. Making mistakes does not matter. What is important is the gesture, the code that reflects that you care about the other. I always insist on the importance of that point,” she added.

And once students understand that, communicating in French becomes more meaningful—and fun.

Retiring this year—with plans to spend more time in the South of France and Florida—Watts recently reflected on her time behind the Red Brick Wall.

What originally brought you to the United States?
“Certainly a big turn in destiny. As a student of American literature in the South of France where I come from, where I was working on Raymond Chandler’s detective fiction for my master’s thesis, I had the opportunity to be a Fulbright exchange student at Indiana University in Bloomington, Indiana. Going to the United States to be a graduate exchange student was considered very “cool” in France. We were all in love with America. France was full of young Americans traveling through Europe on $5 a day! It came to be my turn to see their country.”

How did you transition from American Culture into teaching about your own native culture?
“I became a teaching associate in the French department at Indiana University and loved it. I also met my future husband, who was an American history professor who loved France. With him I discovered the world of politics when he was elected state senator for the Ohio State University area, where I pursued my interest to teach French to Americans, working on a Ph.D. That program gave me the great joy to better know French literature. American literature had led me to French literature. This allowed me to always see bridges across cultures.

“Making references to American literature has always been part of my French classes. But clearly, I found in the pursuit of teaching about my culture something I truly enjoyed, and I have been extremely grateful for this country to have given me such a wonderful opportunity.”

What is your teaching philosophy, and how have you approached that here at Randolph?
“I have always infused my classes with a lot of culture. Learning a language is learning about its culture. I want students to express themselves in French as best as they can, but mostly I want them to have a life-long appreciation for the cultures of the French-speaking world and a curiosity for Africa, Europe, or the Carribbean. I want to leave them with impressions to which they may return any time in their life. This has nothing to do with the conjugation of verbs or the agreement of adjectives, but rather with a feeling of something that they found exciting. I talk to students about famous figures like philosopher Jean-Paul Sartre, sculptor Auguste Rodin, filmmakers, art movements, politicians. I find them very receptive. In French class, they also discover Josephine Baker and James Baldwin. A foreign language is only an access to culture, even their own culture.”

What are some of your favorite classes to teach?
“I am grateful to the College for the chance to teach so many different courses in so many different areas of French culture. I introduced the study of French cinema, African francophone literature of Islam, French for business, French theatre. I found great pleasure in exploring with students authors of the Middle Ages as well as those of the 17th, 18th, 19th, or 20th centuries. These opportunities corresponded to my natural curiosity, I suppose. Here, again, I loved to build bridges across centuries, across authors. A course on 17th century writings and a course on French for business inspired me to write a paper on the art of French business writing that I compared to a 17th century style of behavior. This article received some attention and is still quoted to this day.”

What advice would you give students?
“I have been extremely fortunate to have been part of a profession that I truly loved, working in conditions that encouraged my creativity. Finding true pleasure in one’s work is a formidable gift in life. I encourage students to pursue what they truly love. There is no half measure. Work at building bridges, be curious, seek opportunities, join professional associations, love people, love life. Life is a work of art.”