Janie Campbell ’12 was a history major at Randolph and now works as a preservation consultant at the law firm of Rogers Lewis Jackson Mann & Quinn, LLC in Columbia, South Carolina.

We recently asked her a few questions about her career, her graduate studies at the University of South Carolina, and what else she’s been up to since her graduation from Randolph:

Tell us how you found your job as a preservation consultant and why you wanted to enter the field of law?

“I was incredibly fortunate to have this job fall in my lap. I was working as a graduate assistant at Historic Columbia Foundation while working on my master’s in public history, but my assistantship was ending soon. I approached my supervisor for advice on what to do next as I still had one semester left to finalize my master’s in public history (historic preservation track) and an additional graduate certificate in historical archaeology and cultural resource management. He told me about a local lawyer and developer who focused on rehabilitating historic properties as tax credit projects who was looking for help with his work load. We were introduced in April and he offered me a part-time, freelance position where I could help when I had the time, which was great because, as I graduate student, I held about three jobs at the time. By October, he hired me to join the firm in a full-time capacity as a preservation consultant where I was able to write my master’s thesis at the office every day (and bill the time!) as it was a National Register of Historic Places nomination for a future project.

When I met with my graduate school adviser early in my tenure at the University of South Carolina, I essentially described what I do now. I had no idea that I would find this job in Columbia and certainly not at a law firm! I assumed I would move to Charleston and work for a consulting firm or perhaps an architecture firm that focused on historic rehabilitation projects. Instead, I found my own niche and have been able to blaze my own trail. My boss is known throughout South Carolina as the person to contact for historic tax credit projects, so I’ve received great exposure to a wide variety of projects while getting to develop a reputation for myself for the future.”

How did your Randolph experience prepare you for both your career and graduate school?

“Randolph certainly laid the foundation for my research and writing skills. The Summer Research Program, in particular, prepared me for the type of place-based research I do now. The small class sizes, access to professors, and well-rounded, high-quality education I received at Randolph has allowed me to think more critically and feel confident in my assessment of situations and ability to speak up and voice my opinion (which isn’t always easy in my male-dominated field). The American Culture Program’s multi-disciplinary approach to study further honed these skills of critical thinking and in-depth analysis. All of these skills were further developed in graduate school, but I felt confident from day one that I could hold my own in the classroom thanks to my Randolph education.

Tell us more about what you do on the job. What’s it like being a preservation consultant at a law firm?

“Our law firm practices several areas of law, and it’s really just myself and two other attorneys in a firm of 21 that focus on tax credit projects. (I think there are still several members of our firm that have no idea what I do on a daily basis.) There is no typical day on the job, which I love! I do all the research and writing to access State and Federal Historic Tax Credits. I work with our clients (commercial real estate developers), architects, contractors, and city, state (State Historic Preservation Office), and federal government (National Park Service) entities, which makes for a tough position to be in sometimes. I often joke that I’m the bad guy who always says, ‘No, you can’t do that.’

I do everything from write National Register of Historic Places nominations to Historic Preservation Certification applications (Parts I, II, and III), which detail the property’s significance, rehabilitation work, and certification of project completion, respectively, to conducting site visits to ensure work is being completed as described in the Part II application. I also photograph the before, during, and after conditions of each project. I work closely with project architects to ensure that historic, character defining elements of each building are preserved and restored, which can vary tremendously as what is significant to a 1929 airplane hangar is vastly different from what makes a 1963 mid-century modern motel unique!”

The following photos show the results of Campbell’s project to turn the Curtiss-Wright Hangar into the Hunter-Gatherer Brewery: 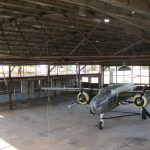 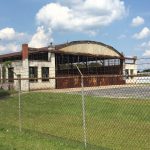 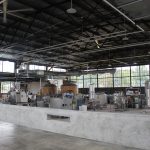 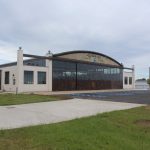 The next set of photos show the results of Campbell’s project to convert an auto garage, furniture store, and paint store into the what is now the Hotel Trundle: 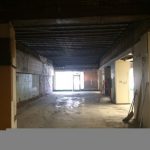 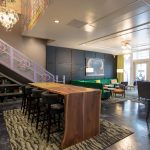 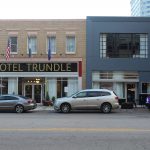 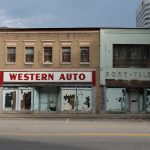