Students wrote heart-shaped messages on a fence in Bell Quad as part of the commemorative service for Matthew Shepard.

The Randolph community gathered in the Bell Quad this afternoon for a commemorative service marking the 20th anniversary of the brutal killing of Matthew Shepard.

Shepard was an openly gay 21-year-old student at the University of Wyoming when he was kidnapped from a bar, taken to a prairie, robbed, beaten, tied to a fence, and left to die in Laramie, Wyoming. His killing became a defining moment in America in the push for increased hate laws.

Leading up to the ceremony Friday, Randolph community members were invited to participate in the Matthew Shepard Foundation Heart Challenge in which they decorated and wrote messages on paper hearts. Those hearts were then placed on a fence post, much like the one Shepard was tied to and tortured on, where they were allowed to freely fly in the wind to signify the way love should flow freely in the world.

At the ceremony, students recited the words of the poem “First they came…” by Martin Niemoller as a reminder to speak out against hate crimes and discrimination.

“Randolph College is a place that loves and accepts all people regardless of their background,” said Wesley R. Fugate, vice president for student affairs and dean of students. “Rich or poor, black or white, gay or straight, Christian or Muslim, American or international, conservative or liberal, able-bodied or not—no matter who you are, Randolph College values you. We celebrate our differences which make us original, and through our originality we are a unique community—one of the most remarkable communities of which I have ever had the pleasure of being involved.

The hearts placed on the fence, along with photos from the event, will be sent to the Shephard family in honor of their son. Because of national protests and the risk of his grave being desecrated, Shepard’s ashes have still not been laid to rest. However, an interment ceremony has been scheduled at the Washington National Cathedral in Washington, D.C. on October 26. 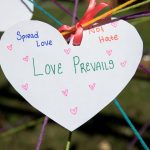 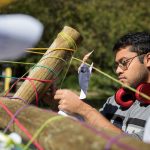 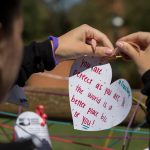 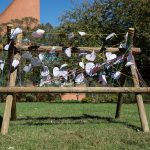 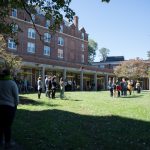 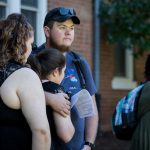 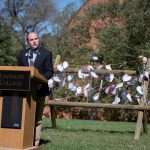