Political science is a wide ranging discipline composed of many separate fields and specializations at the local, national and international levels.

What holds all the separate fields together is a common interest in questions regarding the following governmental and international institutions and their sources of power, political conflict and its resolution, political mechanisms for defining and achieving justice, and the origins and results of policy choices at the national and international level, among other things.

The department addresses these and other issues through a variety of courses in American government, public policy and administration, comparative government and international relations.

Given the diversity of interests within the field, majors will work with their advisor to tailor their program to their particular interest. Most are encouraged to undertake internships or engage in other experiences to bolster their understanding of political processes.

Majors are encouraged to take courses outside the Department that support their academic interests and/or their career goals. Those with a very strong interest in international politics and issues might want to consider the Global Studies major.

Below is a list of available courses offered by the Political Science Department. Consult the Registrar’s Office and the College Catalog for registration information.

An examination of the American political system through an analysis of the political culture, Constitution, party and interest group structure, governmental institutions, and the decision-making process in the United States. Hours credit: 4.

This is an introduction to political thought. We'll study the origins of important ideas, such as justice, freedom, equality, progress, and the rights of the individual, in the context of the great conflicts of human history, from Sun Tzu and Plato to our contemporaries. Hours: 4.

This course examines why violations of the most vulnerable continue to exist in countries from different regions of the world through issues such as children's bonded labor, involuntary participation in armed conflict and terrorism, forced marriage, sex-trafficking, and denied access to food, health care, and education. Through the lens of children's human rights, students will examine how attenuated aspects of failed and/or weak states affect the rights of children. Credit hours: 4. Prerequisite: Sophomore standing. (SS)

Introduces students to different ways of understanding peace, violence, and war and of analyzing the war culture which encourages aggression, violence, and injustice in our immediate and global communities. Toward the goal of social and political change, students will be challenged to examine various approaches to peacemaking and peacebuilding, including nonviolence, peace education, and reconciliation. Hours credit: 4.

Surveys the dominant international relations theories and contemporary forces that shape human, national, and global security. Special attention is given to new players, such as intergovernmental organizations, nongovernmental actors, and civil society, and issues, such as terrorism and the global justice movement, that are giving new shape to the global political environment. Hours credit: 4.

An introduction to the societies and politics of East Asia with the focus on Japan, China, and Korea. Topics covered will include gender and cultural issues, immigration, minority politics, and nationalism. Hours credit: 4.

The course explores aspects of interdependency between global and domestic politics through the lens of global trafficking issues including sex, marriage, drugs, minerals, money weapons, wildlife, cultural properties, organs, and others. The focus will be on how forces of globalization are shaping human lives and numerous state and non-state actors are setting global agenda. The course is open to all students. Those intending to major in global studies will learn about the options for their focus area. Hours: 4. Prerequisite: Sophomore standing. (SS)

This course focuses on questions about the law dealing with issues like truth, fairness, justice, and autonomy in a free society. We'll explore debates about criminal justice and punishment; unconscionable contracts; exploitation; economic efficiency; class, race, gender, sexuality and other forms of inequality; and the pursuit of civil and political rights. Hours: 4. Prerequisite: POL 1102 or permission of the instructor. (HE)

This course encompasses a study of geography throughout the major regions of the world. Attention is given to the physical processes that shape the surface of the earth and to the relationship between human activity and the physical environment. In addition, the course will explore how political forces influence the division and control of the earth's resources. Maps, along with other geographic representations, tools, and techniques, will be used to demonstrate critical analysis of techniques for representation and presentation of information. Credit hours: 4. Prerequisite: sophomore standing or permission of instructor. Identical with POL 2205. (CI)

An examination of the interaction of political parties and public opinion in electoral politics in the U.S. Topics will include the history and current status of political parties; the changing nature of elections; and trends in public opinion. This course is schedule to coincide with a national election which will be used as a case study. Hours credit: 4. Prerequisite: sophomore standing. Offered alternate years.

Covers the basics of the UN system, including its history, structures, and documentation system. Heavy emphasis is placed on writing, research, speaking, and collaboration skills. The class will undertake a parallel study of a specific country in conjunction with the spring National Model United Nations (NMUN) conference. Only students selected in late fall for the NMUN Conference can enroll in the course and participate in the NMUN conference. All conference participants must be enrolled in the course for full credit during the semester of the conference. Hours credit: 4. Prerequisite: permission of the instructor. May be repeated for credit when topic differs up to a maximum of 12 hours.

Surveys the ways gender is experienced by women in Asia. Issues covered include sexual and reproductive decision making, domestic violence, human trafficking, son preference, dowry, and honor killing drawn from Asia. The class will also learn how gender issues are treated in their societies and politics and explore how different actors seek solutions to these issues in the context of global politics. Hours credit: 4. Prerequisite: sophomore standing or permission of the instructor.

The course explores sources of threats to global health and illustrates why health disparities exist. In the first part of the course, students will be introduced to global health principles, key measures, and concepts. This will be followed by examinations of health consequences especially among vulnerable populations caused by neo-colonialism, poverty, racism, cultural belief and practice, climate change, conflict, environmental degradation, and pollutions. In the second half of the course, we will explore ways to achieve global health equity and justice by studying successful regional cases of interventions, new technology and medicine, innovative health programs, and expanding access to health care. Credit hours: 4. Prerequisite: Sophomore standing or permission of instructor. Alternate years. (HE, SS)

This course familiarizes students with a variety of techniques for the investigation of political problems. The first half of the semester is an exploration of how to ask and answer social science questions. In the second half of the course students gain hands-on experience using statistical software to investigate and describe political problems. No prior familiarity with statistics is assumed. Hours credit: 4. A student may receive credit for two of these courses: ECON 2227, MATH 2227, POL 2231, PSYC 2227 or SOC 3395. Alternate years.

An examination of the causes and consequences of nuclear proliferation drawing on both academic theory and historial evidence. The course examines moral questions surrounding nuclear technology, why countries acquire nuclear weapons, and what are the effects of nuclear proliferation on national and international security. We will also examine nuclear strategy, explanations for the non-use of nuclear weapons, and case studies of different nuclear programs. Hours credit: 4. Prerequisite: POL 1133 or sophomore standing.

Hours credit: 4. Prerequisite: POL 1113 or sophomore standing. One time only.

Students will examine the roles citizens play in U.S. politics and government, and the basic economic principles that underlie the U.S. market economy. Students will investigate the processes by which decisions are made in the American market economy and explain the government's role in it. Students study how patriotism, respect for the law, willingness to perform public service, and a sense of civic duty facilitate thoughtful and effective active participation in the civic life of an increasingly diverse democratic society. This course is open to all students and required of students seeking elementary education licensure or students seeking the history/social science teaching licensure. Course content maps to the Virginia Standards of Learning. Identical with I ST 3310. Credit Hours: 4.

A study of the constitutional politics of the United States, focusing on federalism, the separation of powers, and civil rights and liberties. We'll read Supreme Court decisions and situate them in their political, economic, and cultural context to explore the relative powers of American political institutions. Hours: 4. Prerequisite: POL 1101 or permission of the instructor.

This is an entry-level course on federal domestic policy making in the United States. In the first half of the course students will discuss the theory of public policy analysis, focusing on the influence of institutional norms and rules, interest groups, and the public. The second half of the course will consist of a series of case studies of domestic policy issues. Topics may include social security, health care, employment discrimination, criminal justice, and/or anti-poverty policy. Students will pay particular attention to how individuals and institutions interpret policy questions differently as a result of their position in society. Hours credit: 4. Prerequisite: sophomore standing or permission of the instructor. Alternate years.

Surveys why extremism emerges in societies and transcends borders. Through case studies, students will explore topics including psychology of terrorism, gendered violence, rhetoric of terror, recruitment and use of social networks, cyber terrorism, and the political economy of terrorism. This will be followed by a section on deradicalization and disengagement of extremist actors and groups. Hours credit: 4. Prerequisite: sophomore standing or permission of the instructor.

This is an introduction to political thought. We'll study the origins of important ideas, such as justice, freedom, equality, progress, and the rights of the individual, in the context of the great conflicts of human history, from Sun Tzu and Plato to our contemporaries. Hours: 4.

In this course we'll study the political conflicts of our world through the works of important political theorists of the past 50 years. We'll explore major thinkers in contemporary debates about capitalism, freedom, tolerance, national identity, power, community, representation, and human nature. Hours: 4. Prerequisite: POL 1102 or permission of the instructor.

Hours credit: 4. Prerequisite: POL 1113 or sophomore standing. One time only.

The first course in the senior program sequence. The seminar includes the discussion of current issues in U.S. politics and global studies and current research fields with a focus on research design. Students will have weekly assignments and identify a research problem they will undertake. Credit hours: 4. Prerequisite: Permission of department.

Each student will work on a research problem chosen in consultation with departmental faculty. A final paper embodying original research in an area of politics will be required. Hours credit: 4. Prerequisite: senior standing.

The second course in the senior program sequence. The capstone completes the student's course of study in the major. Each student will work on a research problem chosen in consultation with departmental faculty. A final paper embodying original research in an area of politics is required. Credit hours: 4. Prerequisite: POL 4493. 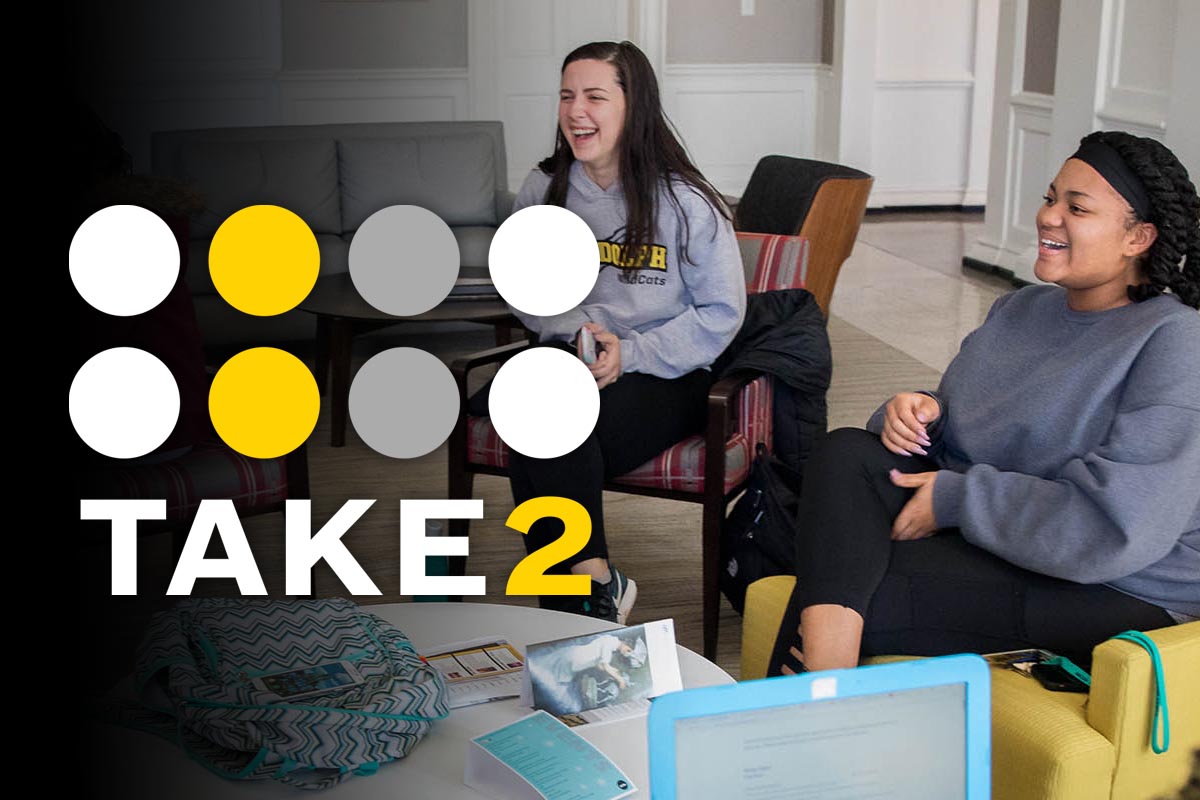 TAKE2
Wednesdays are for whatever. Yep, you’ll have every Wednesday to do what works for you. Study up with friends, dig into research, do an internship or two. The choice is yours.
Visit Inquire Apply