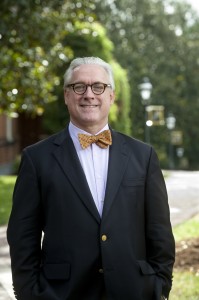 Bradley W. Bateman became the 10th president of Randolph College on July 1, 2013. A passionate advocate for the liberal arts, Bateman previously served as the provost and executive vice president at Denison University and an associate dean and the Gertrude B. Austin Chair of Economics for Grinnell College, where he also served as acting director of both the Center for Prairie Studies and the Rosenfield Program in Public Affairs, International Relations, and Human Rights.

A noted economist, President Bateman is the author of Keynes’s Uncertain Revolution and co-author (with Roger Backhouse) of Capitalist Revolutionary: John Maynard Keynes.  He earned a B.A. in economics from Alma College in Alma, Michigan and received both his M.A. and Ph.D. in economics from the University of Kentucky.

During his tenure at Randolph, Bateman has become a national voice in a growing movement to champion the liberal arts. He has penned multiple articles and editorials for national publications, such as The New York Times, The Pittsburgh Post-Gazette, and more. In addition, he has appeared in stories locally, regionally, and nationally, including National Public Radio. Under his leadership, Randolph has made significant gains, including consistent enrollment growth, increased giving, and infrastructure improvement. He has worked to expand internship opportunities for students, increased the College’s emphasis on service, and infused the co-curricular process in to Randolph’s advising program. During Bateman’s first years as president, Randolph announced several new partnerships and programs including: a major partnership with the National Gallery, London—the first of its kinds for an American educational institution; a special financial aid program for students from the surrounding area (Lynchburg City and the counties of Amherst, Appomattox, Bedford, Campbell, and Nelson); a new dual enrollment agreement with Central Virginia Community College, and an agreement with Endstation Theatre Company to serve as Randolph’s theatre company in residence. During his tenure, Randolph has also completed significant renovations to Wright Hall and Cheatham Dining Hall.

Bateman’s work on the religious influences on American economics has appeared in many journals, including the Journal of Economic Perspectives, History of Political Economy, and the Journal of the History of Economic Thought. He is co-editor (with Spencer Banzhof) of Keeping Faith; Losing Faith: Religious Belief and Political Economy. Currently, he is working on a book on the religious influences in the formation of American economics in the late nineteenth and early twentieth centuries, and how the discipline subsequently became secularized.