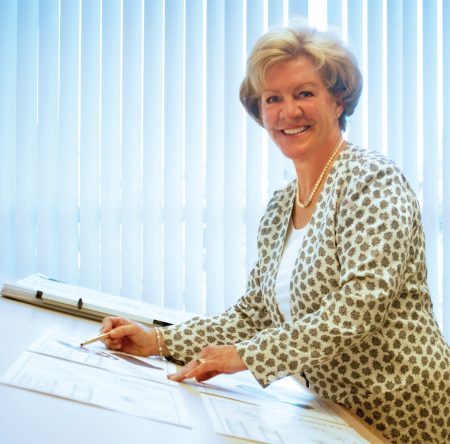 Katy Worrilow ’80 founded her company, LifeAire Systems, after discovering that airborne pathogens could affect the in vitro fertilization process.

Katy Worrilow ’80 founded her company, LifeAire Systems, after discovering that airborne pathogens could affect the in vitro fertilization process, even in clean rooms designed to have low levels of pollutants like dust, chemical vapors, and airborne microbes.

After Worrilow, who studied biology at Randolph and spent most of her career as a clinical IVF provider, made the discovery, another followed: There was nothing on the market that could purify the air and fix the problem.

So she set out to design one herself alongside a team of fellow scientists.

The resulting LifeAire system is an in-duct air purification system designed to remove airborne chemicals and biological pathogens. In IVF laboratories, it allows doctors to control and remove the variable of ambient air from their process.

The system also can be used in hospitals and other healthcare facilities and could help prevent the airborne spread of COVID-19. Worrilow and her team recently created a new product, a portable decontamination unit that will sterilize N95 masks that some healthcare providers are being forced to reuse as supplies of personal protective equipment, or PPE, dwindle.

Both could be effective in the fight against COVID because Worrilow and her team set the bar so high.

Worrilow, who is based in Pennsylvania, said they know they can add COVID-19 to that list.

LifeAire’s original system was recently the subject of a 12-month study, involving more than 8,000 patients, at the St. Luke’s University Hospital Network in Pennsylvania. It looked at how the air quality in healthcare environments could address the spread of infections.

“We had half a floor protected by our technology, and those patients in those rooms saw a reduction in length of stay by 39 percent. The hospital calculated their cost savings was $2.3 million just specific to those rooms, primarily because the patients were out sooner,” she said.

LifeAire is currently used by 50 IVF programs and one hospital, with talks of adding them to more. The company also recently installed a unit in its first long-term care facility.

As for whether it will be used during the current pandemic, Worrilow said they’ve fielded phone calls from the White House’s COVID task force and are ready to ramp up manufacturing if needed.

“Our whole team has kind of redirected to help in any way we can,” she said, adding they’ve reached out to two new manufacturers just in case.

For Worrilow, it’s personal—her husband is an ER doctor who will be on the front lines fighting the outbreak.

That’s what inspired the new portable unit. They started talking about it over a weekend in late March, and a prototype was available within a few days. After successful testing in the weeks since, it will be available soon, she said.

“Our idea was, ‘Could we take the kill section, which is quite large, miniaturize that and put it in a box, so you put your mask in there and it’s completely sterilized?’ You have to be careful because it’s a mask. It’s concave, it’s convex. It’s got nooks and crannies.”

Called the Aire~BioLite PPE Decontamination Unit, it’s designed to not only kill bacteria and viruses on the surface of the mask but in each layer. It can hold 20 masks at a time, with a 10-minute decontamination cycle, according to LifeAire’s website. And it’s ready for use immediately after the cycle finishes.

“I view it as, am I comfortable having my husband wear a mask, have it contaminated and put in there to sterilize, then rewear it? Or any of his colleagues. Anyone on the front lines.”

For Worrilow, finding a way to help comes naturally. It’s what she’s done her entire career: See a problem, and find a solution.

“My doctorate was split between the School of Medicine and the School of Bioengineering only because I was fascinated by solving problems that impacted medicine. I never really thought about it but I think that combination was very important for LifeAire, for that kind of path,” she said, noting that working in IVF was the first time it all came together for her.

“It was basic science research that led to clinical improvements for improved patient care,” she said. “That’s exactly what I love.”