With a father from Belgium and several other family members from Europe, Anthony Fonnesu ’20 is no stranger to French culture. However, a unique opportunity this summer to serve as the City of Lynchburg’s special ambassador to its sister city, Rueil-Malmaison, France, allowed him to fully immerse himself in all things French—including the language.

It all started during the previous academic year, when Francoise Watts, his French professor at Randolph, informed him about Lynchburg’s relationship with Rueil-Malmaison. The two cities established a sister city partnership in 1996, in part because of their strong business ties in the nuclear and engineering industries. “Professor Watts and I were adamant about improving the sister city connection between Rueil-Malmaison and Lynchburg,” Fonnesu said. “The last time there was any kind of exchange was 10-plus years ago. My hope was that we could revitalize the sister city program and allow other students to enjoy and experience the connection.”

Fonnesu and Watts began conversations with both the Lynchburg and Rueil-Malmaison governments, which included a special presentation by Fonnesu to Lynchburg City Council. As a result, he was named a special ambassador to the French city. His work also opened the doors to a summer internship opportunity with Schneider Electric, a multinational, Fortune 500 company based in Rueil-Malmaison.

Fonnesu worked in the business development department at the company, where he was primarily responsible for helping organize Rueil-Malmaison’s Latin American Day celebration. He also used his French and English written and verbal skills to translate documents and give tours of Schneider’s Electric’s Ecostruxure Innovation Hub.

“Being surrounded by higher management at the company and talking with upper level city officials of Rueil-Malmaison taught me how to network and make meaningful connections,” Fonnesu said. “Staying with a French host family also helped me enhance my language and cultural assimilation skills.”

In his capacity as ambassador, Fonnesu laid the groundwork for a potential tennis tournament between Lynchburg and Rueil-Malmaison. He also participated in a gift exchange, where he met with Rueil-Malmaison officials and presented gifts from the Lynchburg City Council. Fonnesu credited Randolph and his French and business professors for helping prepare him for the opportunity. He was also grateful to receive a Jolley Mini-Grant, which helped offset his living expenses during his experience abroad.

In addition to his professional work, he was able to take in the culture and visit historic sites in nearby Paris, including the Eiffel Tower, the Catacombs of Paris, and L’Arc de Triomphe. He also visited Notre Dame shortly after the tragic fire that caused significant damage to the popular landmark.

“Never did I think that I would be working alone in a foreign country where English is not the main language,” Fonnesu said. “Learning to navigate unfamiliar places and take care of myself will give me confidence to persevere in anything that I come across in my career and life in the future. This experience has helped me grow and will continue to shape me as a scholar, French speaker, and person.” 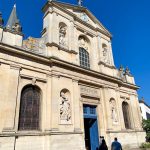 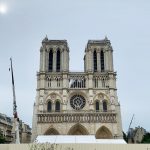